Many a player has found themselves completely wound up about fall damage in The Witcher 3, but according to the books it shouldn’t even be a thing.

The Witcher saga literally features a passage that makes Geralt’s ability to fall from massive heights unscathed canonical. I’ve read the books, but I never thought twice about it until someone posted it on Reddit earlier today. Check out the section below, which has been lifted from Time of Contempt.

“They had been attacked by a white-haired fiend, who had fallen on them from a wall, from a height that would have broken a normal man’s legs,” the passage begins.

“It ought to have been impossible to land gently, whirl in an impossibly fast pirouette, and a split second later begin killing. But the white-haired fiend had done it. And the killing had begun.”

Now, if you’ve played The Witcher 3, you’ll know that the headline of this article is true. Fall damage – especially when examined with the above passage in mind – is total horseshit. If Geralt can survive a fall that would break a man’s legs in the books before instantly pirouetting with a drawn sword, he can surely hop off a small Skelligan ledge no more than a metre high without needing an immediate gulp of Swallow. 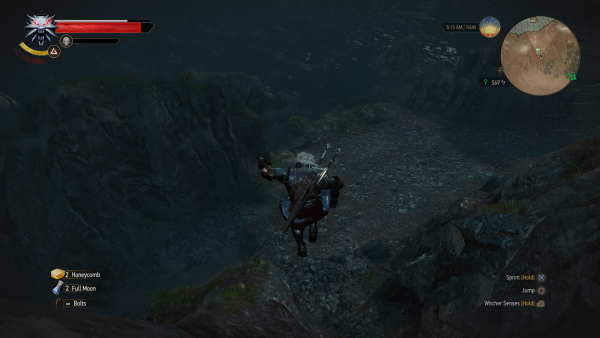 Fortunately, the game is accurate when it comes to certain aspects of the books – for example, another Reddit user pointed out that in Baptism of Fire, Roach is pretty much described as a total pain in the arse.

So yeah, fall damage in The Witcher 3 is not only irritating – it’s not even canonical. That being said, I’m pretty sure Roach chilling out on rooftops probably isn’t lifted straight from the books either.

On the other hand, Geralt’s short attention span and sidequest obsession in The Witcher 3 actually is backed up by book lore, so at least there’s that.