From March 1st you can celebrate Mario and co.’s 35th anniversary with a collection of in-game items available in Animal Crossing: New Horizons. These range from clothing and decorative items to faithful recreations of classic Mario level furniture.

It’s not yet entirely clear how long the promotional items will be available in ACNH, or indeed if they’re sticking around for good. But with quite a few items to collect — and a limit on the number you can buy per day — it’s a good idea to start now if you’re hoping to redecorate your island with a Mushroom Kingdom theme.

There are 33 items in all, bought individually using the in-game currency Bells (but in real-world terms, the update is free to all ACNH players).

What are the new Mario items in Animal Crossing: New Horizons?

The majority of items included in the crossover are furniture, though not necessarily as you know it. This is a far cry from ACNH’s usual cosy matching bedroom sets, and instead takes inspiration from classic Mario levels.

If you’re looking to throw yourself into Mushroom Kingdom-inspired island design, you can now really make the place look the part. The crossover items include everything from power-up mushrooms, blocks, and coins to angry thwomps and iconic goal flagpoles.

Interior decoration hasn’t been forgotten, with a matching set of wallpaper and flooring included in the collection, plus two new rugs. These allow you to turn your character’s house (or, at the very least, one of the rooms) into a Mario level in miniature.

You can also cosplay as Mario, Luigi, Princess Peach, and Wario with four-piece ensembles designed around each character’s distinctive look. (Unfortunately, I can confirm that Waluigi has been snubbed yet again.) 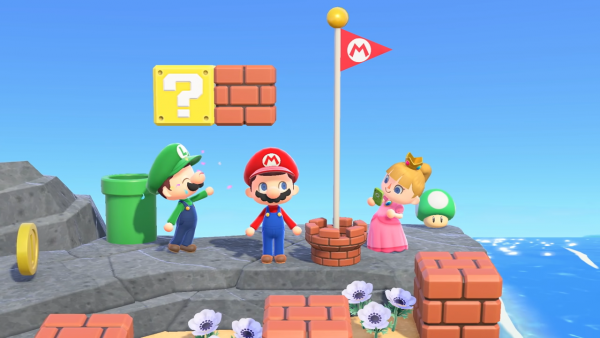 For a full list of all Mario-themed items that have been added to ACNH, including their price in Bells, see the table below:

How to get Mario items in Animal Crossing: New Horizons

Items from the Animal Crossing: New Horizons + Super Mario Bros. collection can be found exclusively in the Nook Shopping menu. Neither Nook’s Cranny nor the Able Sisters’ Tailor Shop will be carrying these items, so you’ll need to order them from Tom Nook’s answer to Amazon.

Nook Shopping can be accessed using the Nook Stop terminal located in Resident Services. Alternatively, if by now you’ve bought 100+ items using the terminal, you’ll also have a Nook Shopping app on your phone for on-the-go shopping sprees.

You’ll notice that a new ‘Promotional’ tab has been added to the ‘Special Goods’ category of the Nook Shopping menu. All the new Mario-themed items can be found there. 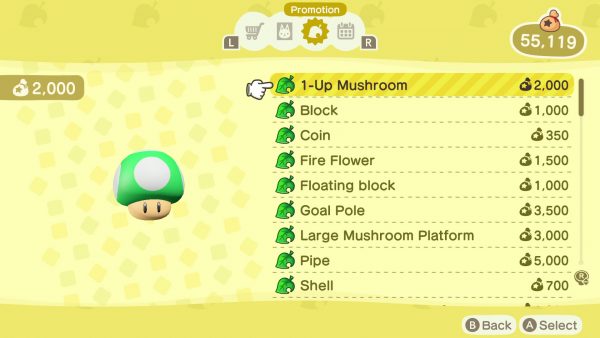 All 33 items from the collection are available to buy immediately. However, bear in mind that you’re still limited to five Nook Shopping purchases per day. They also don’t arrive immediately, and instead will be delivered to your mailbox the day after purchase.

It’s potentially going to take quite a while to get everything you want, whether that’s the complete set or enough duplicates to re-create a proper Mario level.

The first time you play the game after installing the February 25th update, you’ll receive the customary post-update gift from Nintendo. This gift can be found in your in-game mailbox.

Despite the slightly confusing name, the Mushroom mural wallpaper has nothing to do with the November’s seasonal mushroom recipes. 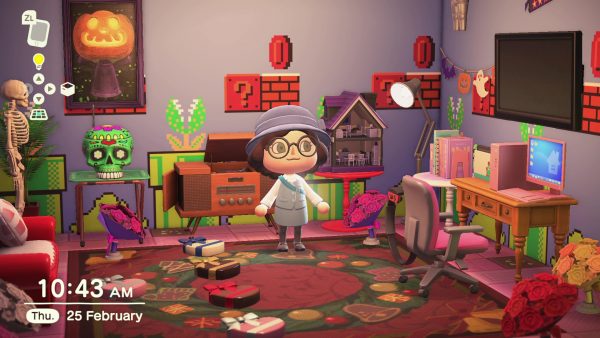 Instead, it’s a teaser to remind you of the Mario crossover items unlocking on March 1st.

All users who had a profile in ACNH prior to February 25th will receive the free gift the next time they play. However, if you start a new game after this date — or want multiple Mushroom mural wallpapers — you can buy duplicates of this item for 3,000 Bells each from the Nook Shopping app.

How to place Pipes in Animal Crossing: New Horizons

While most of the items included in the promotional crossover are mainly cosmetic, the Pipe adds a brand-new function never seen before in ACNH.

Players familiar with the Mario games will probably recognise it as a warp pipe. In their own series, Mario and friends can jump in these for near-instant transportation to another part of the level. 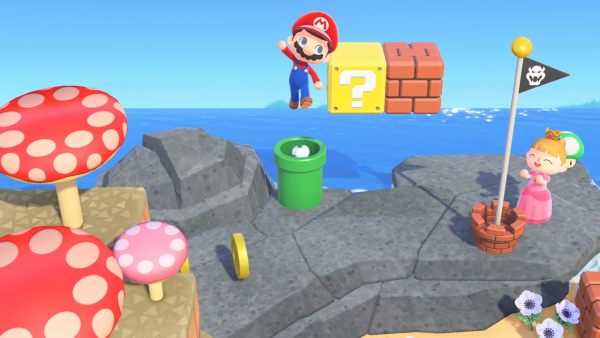 Now, if you place two or more Pipes on your island, you’ll be able to perform the same teleportation trick. This can potentially save you from long minutes spent running from one end of the island to the other, or from rearranging the whole layout to accommodate a new bridge or incline.

What Pipes can (and can’t) do

Here are a few things we’ve learned about Pipe placement in ACNH:

All pipes on your island are connected. Obviously, you need at least two pipes on your island in order to travel between destinations. But if you have more than two pipes, they’ll all be part of the same island-wide network. So which pipe will you pop out of at the other end of your journey? The game will simply choose one at random.

Pipes can be placed inside players’ houses. And they’ll still be connected to every other pipe on the island, including the ones in outdoor locations and other player-owned houses.

Imagine hopping into a pipe in your living room and popping out seconds later on the secret beach for a spot of sunbathing. Or — for real-world cohabitees who share an island, but are forced by the game’s rules to maintain separate homes — you can now kind-of connect up your living spaces. 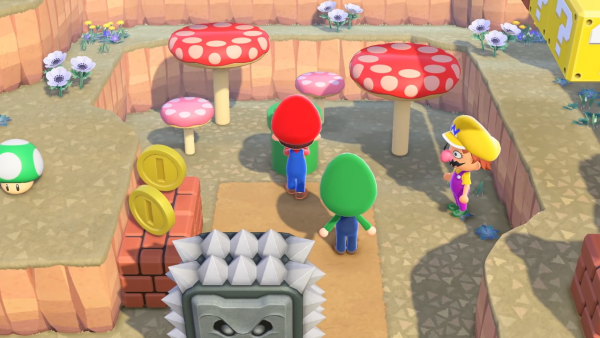 Pipes will only work if there’s space. You can place a pipe anywhere that has room for it, but in order to teleport through it, there will need to be free spaces around it too. Your character needs to be able to touch the pipe to interact with it, and there has to be at least one adjacent empty square for them to climb in and out.

Pipes don’t work inside villager houses. Villagers can have their own Pipes if you provide one as a gift. However, Pipes inside villager houses aren’t connected to the island-wide network. Attempting to jump into one will result in you jumping straight back out again, and you can’t use your Pipes to teleport into your villagers’ houses.

It’s also unlikely that villagers can use Pipes autonomously to travel around the island. (We’ve certainly not seen it happen yet, and it could potentially cause some problems.) So bear in mind when using a Pipe in place of a bridge or incline that your beloved animal friends may not be able to follow you to parts of the island that are only accessible in this way. 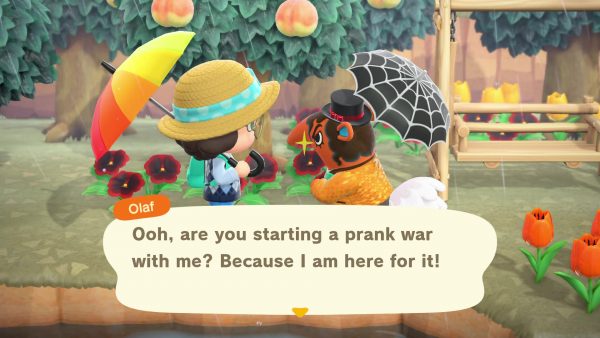 For more information about what’s new in Animal Crossing: New Horizons this March, check out our guide on the new holidays added in the spring update.

We also have regularly updated guides on the bugs, fish, and sea creatures available to catch in the game every month.