Spring has returned to the northern hemisphere, and once you’ve downloaded the most recent update, you’ll immediately notice a few changes have happened on your island.

Most obviously, the snow is gone (and along with it, your chance to catch dung beetles). However, any snowboys you’ve built over the last few days will stick around, melting at the usual pace.

And, as Isabelle will inform you in her daily announcement, bamboo plants will now drop the young spring bamboo crafting resource once again.

You’ll also receive a gift in your in-game mailbox. The Mushroom mural wallpaper is a teaser for the Mario crossover items coming to the game on March 1st.

In addition to hailing the return of spring, this update has added some new minor holidays.

While there are no major events between now and Bunny Day (which coincides with real-world Easter celebrations falling in late March/early April), you can celebrate three new occasions with items bought from Nook Shopping and the Able Sisters’ tailor shop. 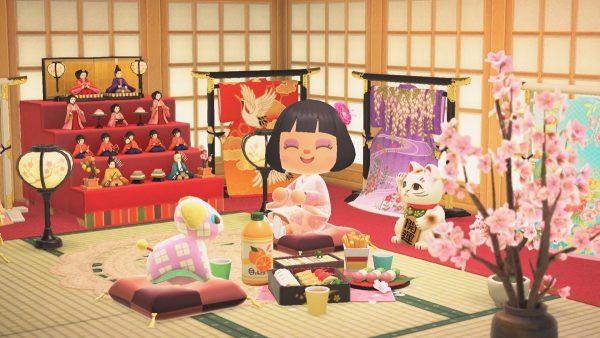 If, like me, you grew up without much awareness of Japanese holidays, your main exposure to hinaningyo dolls may well have been from the Fatal Frame series of horror games, which likes to use them in creepy puzzles. ACNH is now giving you the chance to enjoy them in a less threatening fashion.

There are two Hinamatsuri Festival items available to buy from the Nook Shopping app’s ‘Seasonal’ section, under the ‘Special Goods’ tab. In addition to obtaining your very own Hinaningyo doll display, you can purchase a Blossom Lantern to decorate for the festival too. 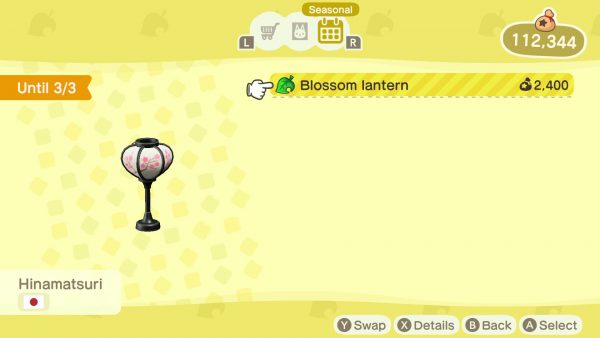 Unusually, you won’t be able to buy both on the same day. Instead, they’ll be purchasable from the app on alternate days — much like how the seasonal display at Nook’s Cranny works. One item will be available per day between now and March 3rd. So you’ll need to check back on multiple days if you want to ensure you get hold of both.

OK, calling this one a “real-world holiday” is probably stretching things a bit. Pi Day is marked as a geeky joke on March 14th, since the date 3.14 represent the first three digits of pi.

This doesn’t work as well if you write it the British way (14/3), but for once we’re not going to debate the merits of different date formats. That’s because, in the absence of any deeply held traditions, it’s become the done thing to celebrate Pi Day by eating delicious pie. And we love any excuse to treat ourselves to some tasty food. 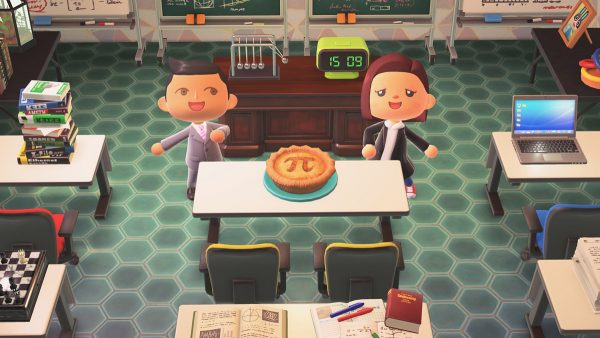 This is the simplest addition in the new update. Beginning March 1st (which also happens to be the day the new Mario items unlock in the game) and running until Pi Day itself on March 14th, you’ll be able to buy a π pie, a.k.a. Pi Day Pie. It will be listed under the ‘Seasonal’ tab in the Nook Shopping menu. 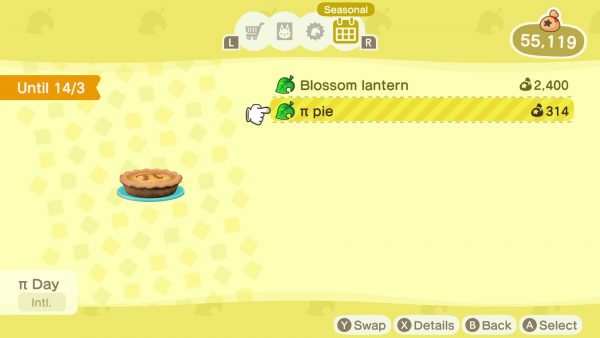 What we’ve seen so far indicates that this will just be a decorative item. Still, it’ll make a nice addition to your kitchen, especially if you’re redecorating for spring. Leave it cooling near a windowsill for maximum cosiness.

Is anyone else hungry now?

Rounding out the new seasonal collections is the Shamrock Day set. Shamrock Day is, of course, an affectionate pastiche of real-world St Patrick’s Day celebrations.

Animal Crossing is too family-friendly to include an in-game equivalent of what many people consider to be the real St Patrick’s Day main event (drinking green-dyed beer until you vomit). But you can re-create the feeling of an overly-stereotypical Irish pub, with a whole set of new clothes and furniture items. 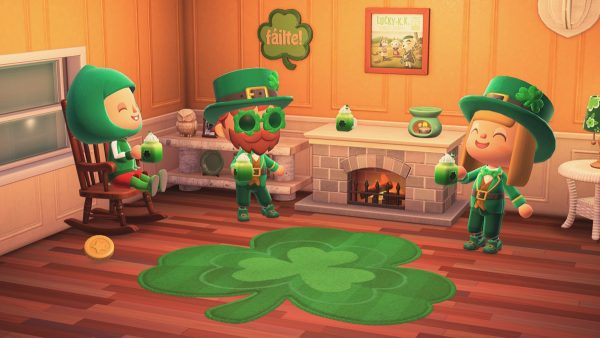 New Nook Shopping seasonal items are the Shamrock Rug, the Shamrock Doorplate (it reads “fáilte!”, which means “welcome!” in Irish), and a Shamrock Soda.

Continuing the trend that started with the Hinamatsuri Festival, only one Shamrock Day item will be available to buy on the Nook Shopping app every day. That means you only have eight days to get all four items, so be sure to check often if you want the full set.

Finally, the event will add a new DIY recipe for a Shamrock Wand. This will be obtainable from balloons during the same eight-day period that the Shamrock Day collection is available for purchase. Keep an eye on the skies during this week to avoid missing out.

The Shamrock Wand recipe calls for three clumps of weeds and three ordinary star fragments. In Animal Crossing: New Leaf, newly-spawned weeds were replaced by clover around Shamrock Day. There’s no word yet on whether clover will return in New Horizons or whether you’ll need it to craft the Shamrock Wand, but it’s something to look out for going into March.

If you’re keen to ensure you don’t miss any of these limited-time items while they’re in the game, refer to the table below for a full list of prices, availability dates, and where to buy: