As Eivor’s Asgardian adventure continues in Assassin’s Creed Valhalla, Havi must collect impossible ingredients to craft an unbreakable chain to cage the beast, Fenrir. Doing so takes him across the god’s domain in search of a cat’s footfall and the root of a mountain.

Both are required for the legendary Dwarven smith Ivaldi to create the magical binding Odin needs.

Like the puzzle to unseal the Well of Urdr, these quests are unlike many that you’ve come across in Assassin’s Creed Valhalla so far, and as such can be very confusing.

Rather than a traditional quest marker or set of clues, you have to solve riddles found in your character inventory to progress.

To find them, open your menu, go to inventory, then hover over the bag in the top right corner. Click inside the bag and you’ll open the miscellaneous section of your inventory.

Scroll down to the quest items section, and it’s here that you’ll find your riddles.

Here’s where you need to go to collect the cat’s footfall and the root of a mountain.

Havi’s first task collecting ingredients for the unbreakable chain is a cat’s footfall, with the riddle reading as follows:

Over the gate to the Great Norse Hall,
A golden cat sits patiently,
Gazing upon many tall towers,
She’ll flee when she is found,
But follow without fear,
Look, leap, and descend,
Once she leads you to the end,
She may ghost to the ground,
Land as well, and swiftly steal her sound.

The location mentioned in the riddle is the white and gold gate in front of the throne tower on the central island of Asgard – where you entered at the start of the vision story arc.

Climb onto the top of the gate, and on the northern side you’ll see the golden statue of a cat. 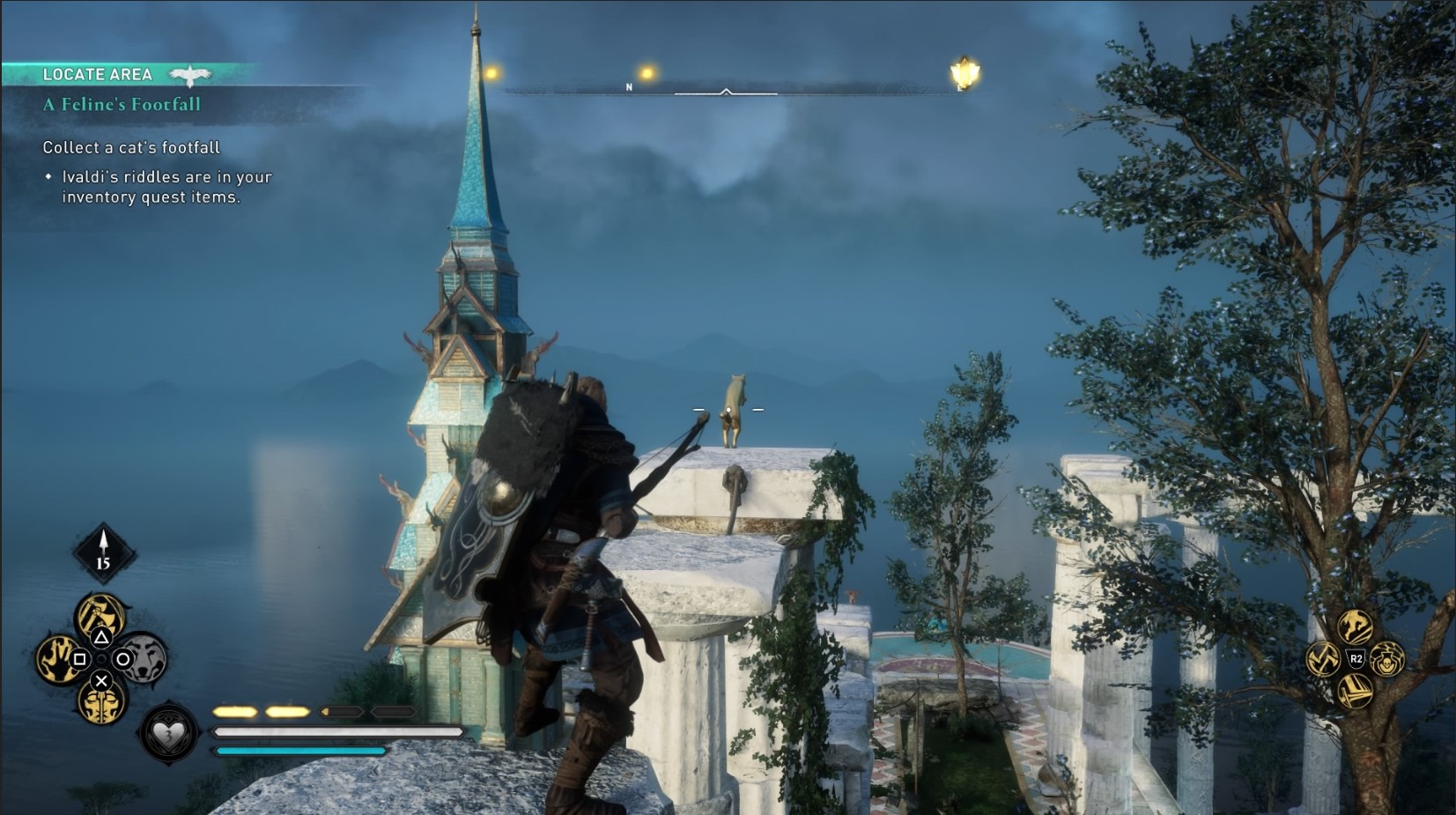 When you go near it, the cat statue will teleport away from you. Follow it by using parkour to get between the different structures, sliding down the zipwire when you reach the edge of the palace.

Don’t overthink while following the cat statue, it only teleports a few feet in front of you, so it won’t be too far away if you lose track of it.

At the end of the short chase, you’ll have to do a leap of faith off the edge of the castle into a pile of leaves below – this is where you’ll collect the cat’s footfall. 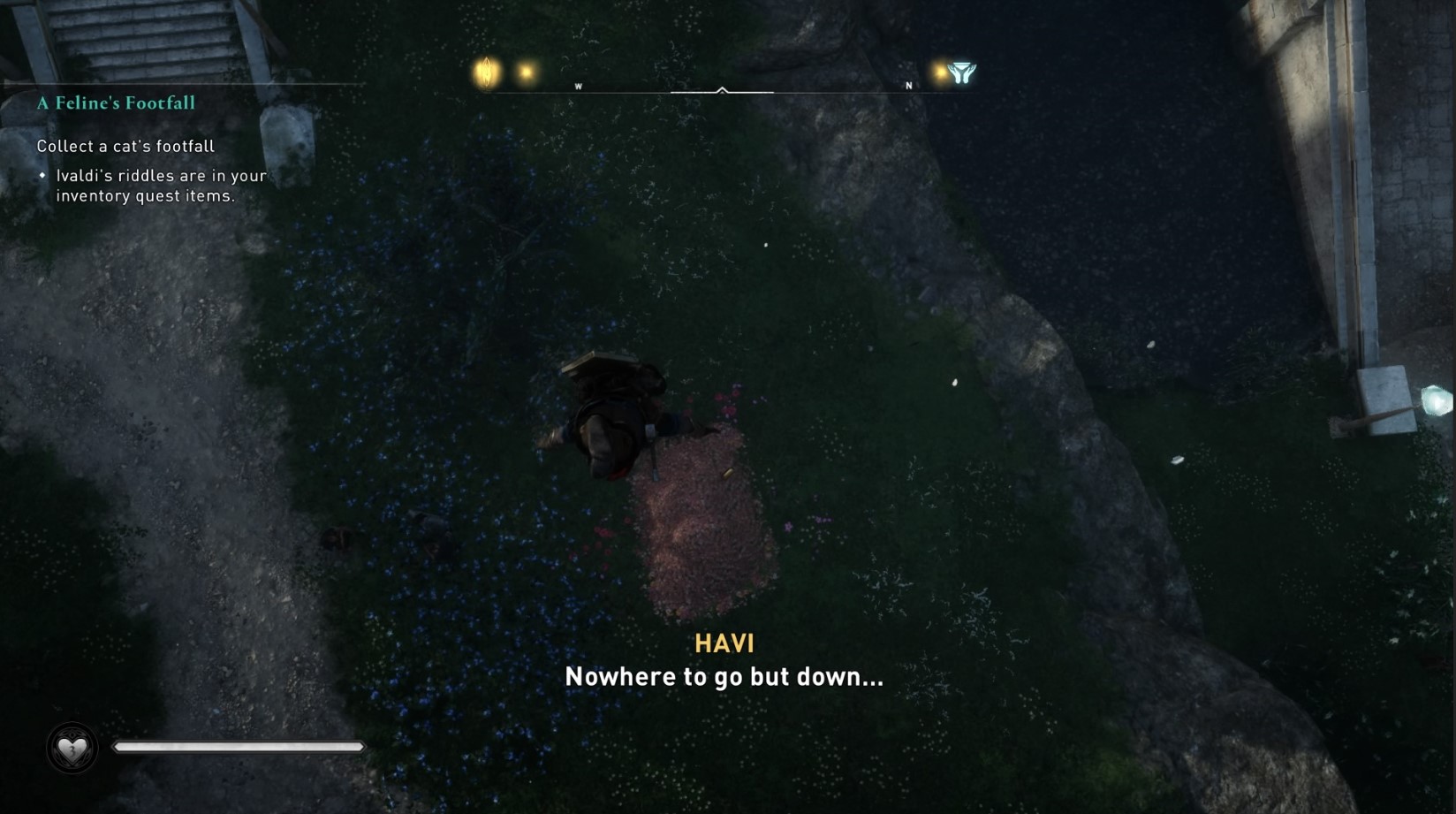 Next on your agenda is the root of a mountain. The riddle for this one goes:

Cradled in rock,
At Asgard’s highest height,
A seed sleeps in Ymir’s cold grip.
Warm it awake, bring it to water.
For old bone to sprout new life.

The highest height in Asgard is the mountain in the southwest of the region, overlooking Utangard Chasm. It’s marked by an eagle synchronisation point. 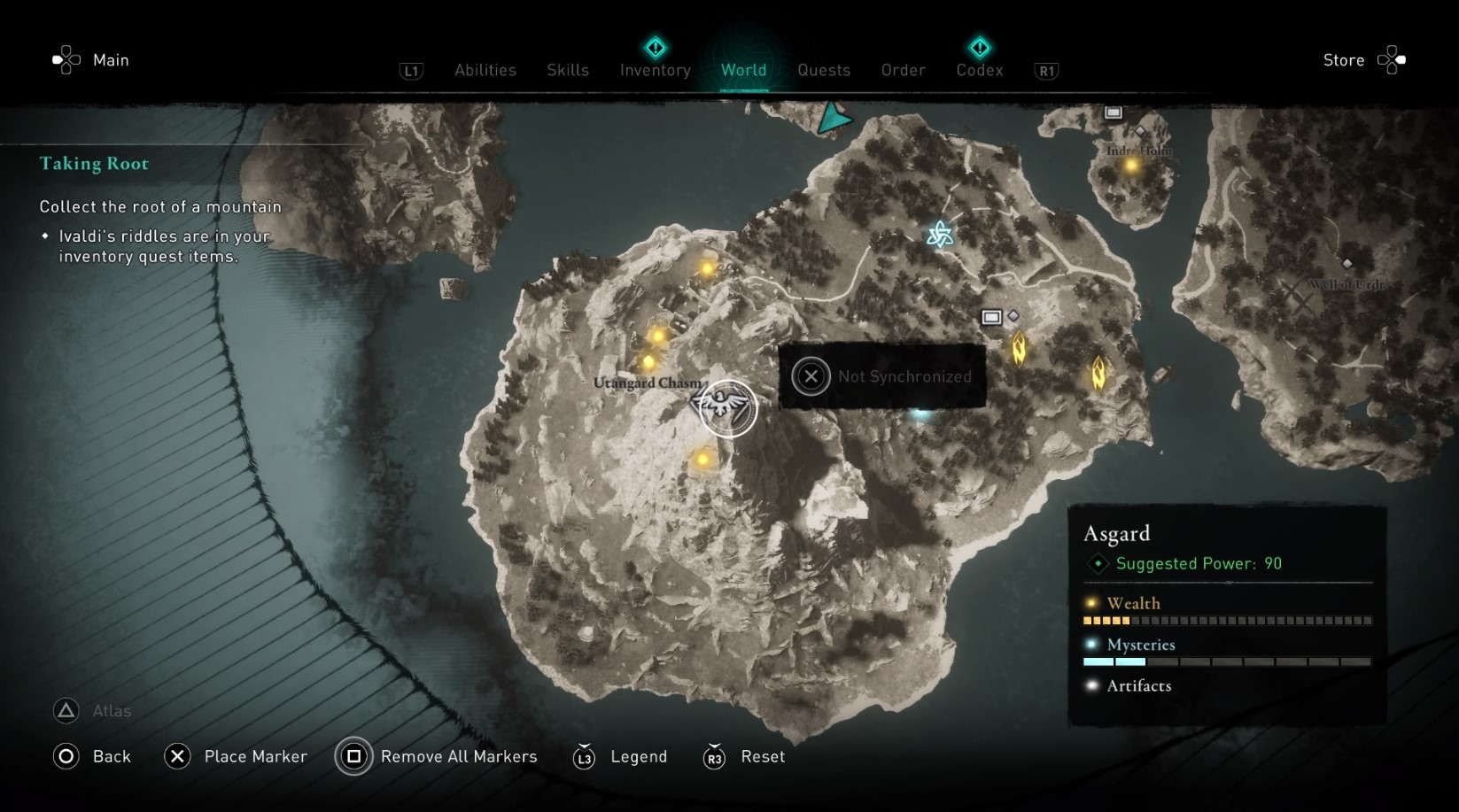 Make your way up the peak and synchronise. Look down from the edge and you’ll see somewhere you can leap of faith to.

Just next to the pile of hay, you’ll see an egg-like object – the seed for the root of a mountain. 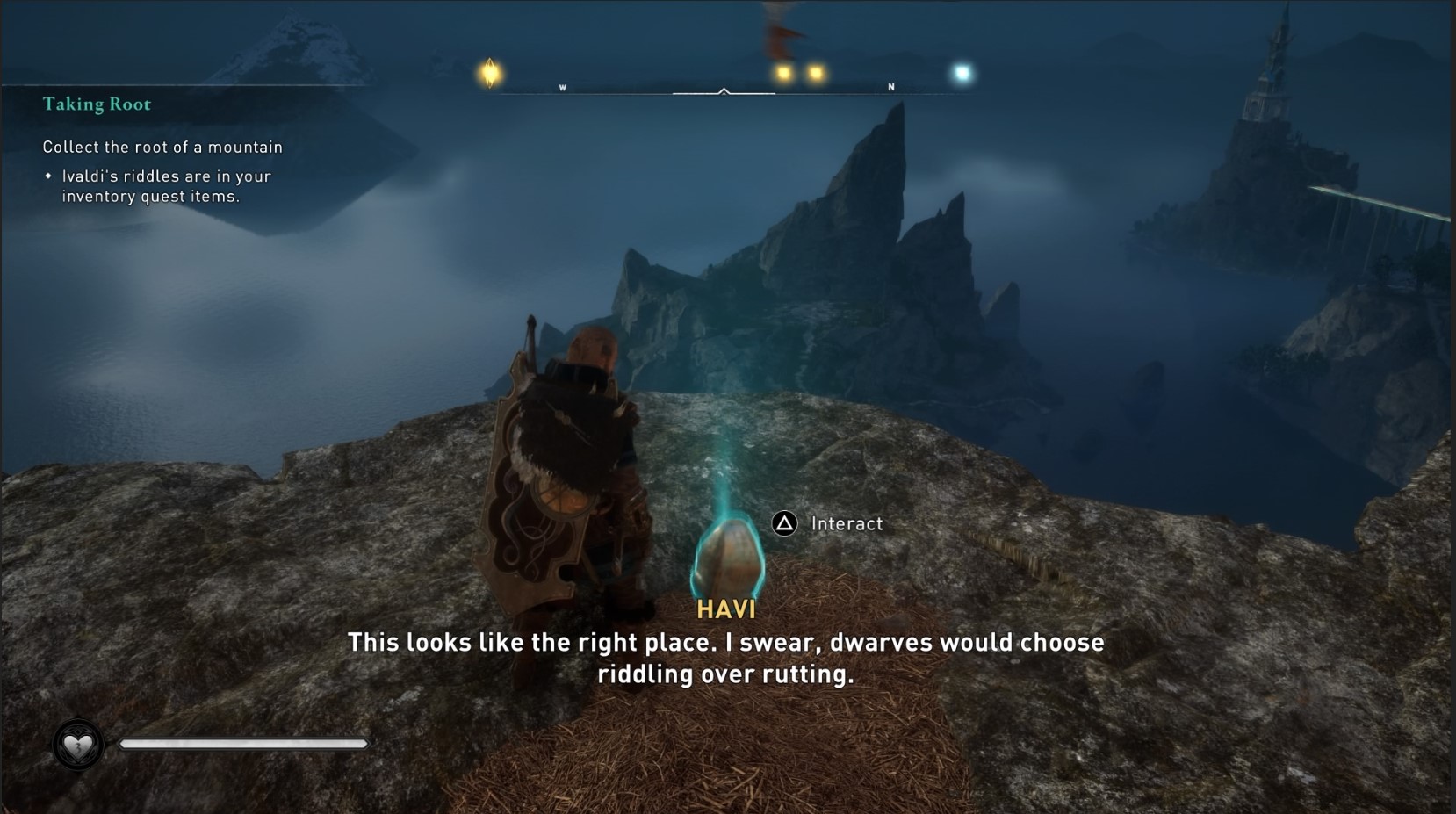 To “warm it awake”, open your quick menu by pressing down on your d-pad, then holding up with the right stick to equip a torch. Then hold L2 to aim the torch and R2 to throw it at the seed. 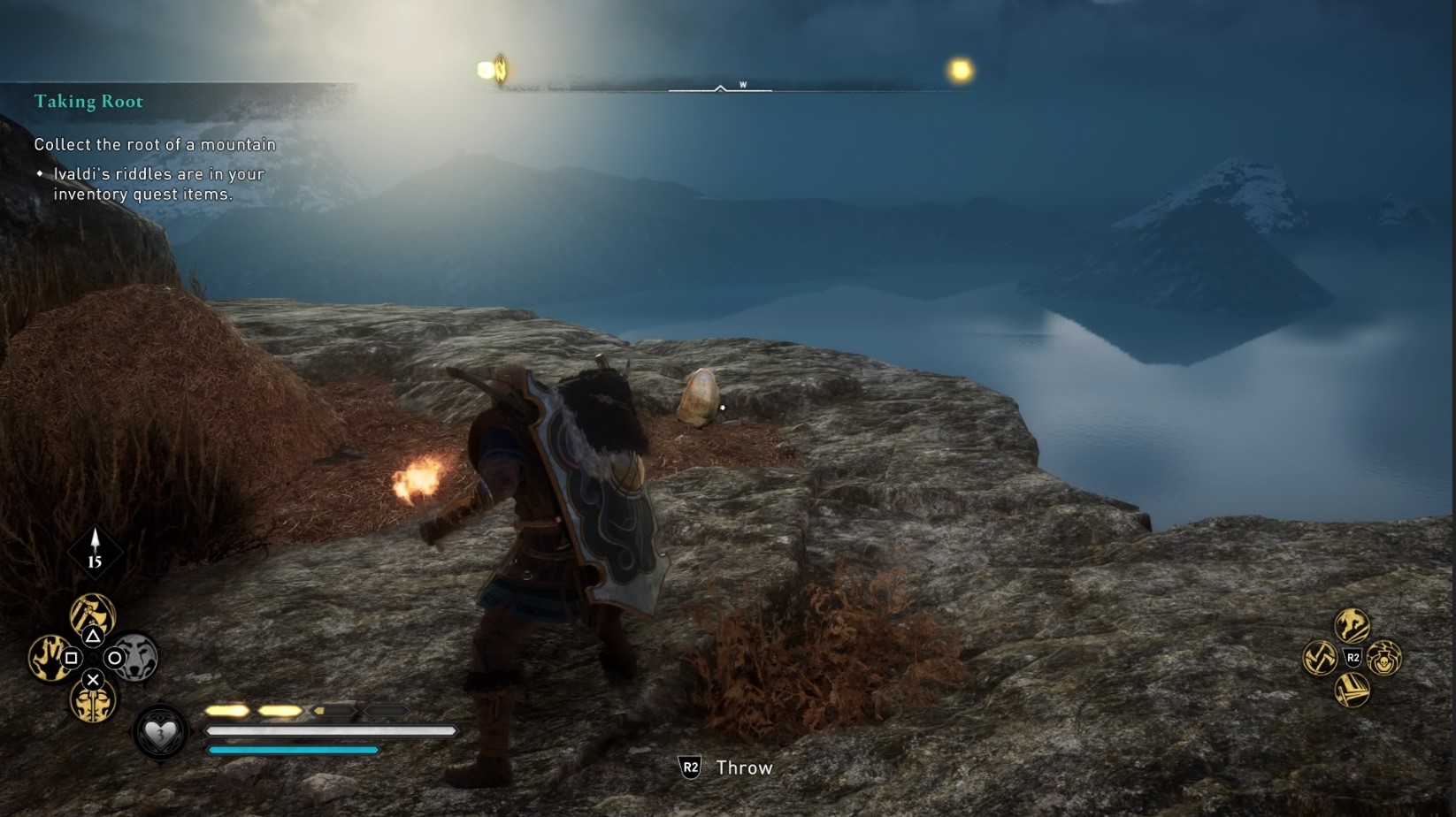 Next, pick up the seed and look over the edge of the cliff next to you. There’s a body of water below, so throw the seed off the drop and leap of faith after it. 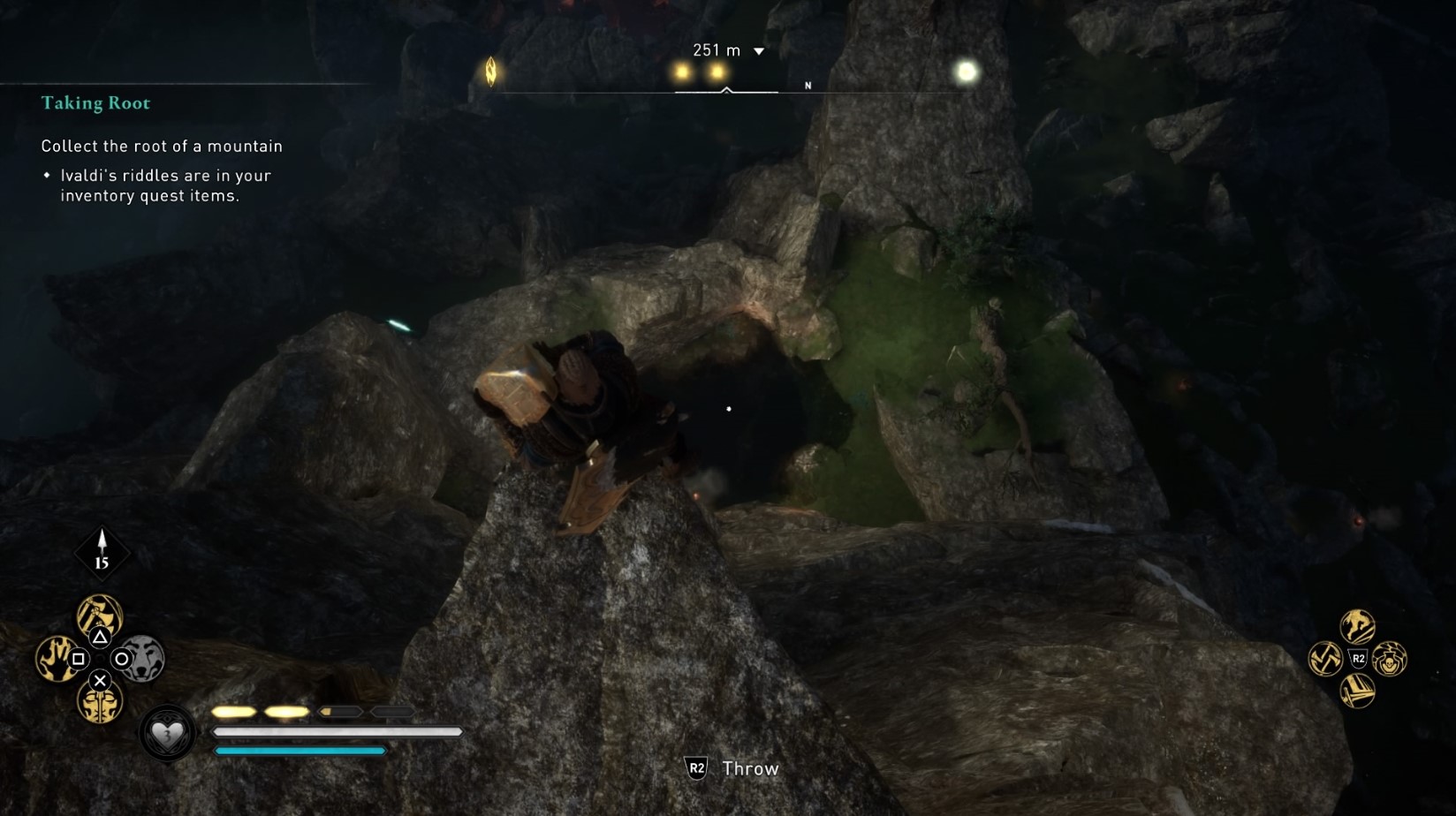 On your right, as you clamber out of the drink, you can snag the root of a mountain from a rock.

With the two impossible ingredients in hand, it’s time to return to Ivaldi.

For more on Assassin’s Creed Valhalla, here are our picks for the best weapons in the early, mid, and late game.