Destiny 2: Beyond Light is finally here and it’s time to get your hands on a new Season of the Hunt Exotic weapon.

Duality and No Time to Explain are now available for Destiny 2: Beyond Light players, but in this guide, we’re on the hunt for the Salvation’s Grip Exotic Grenade Launcher.

Upon firing, each projectile will turn into a Statis Crystal that will freeze enemies on impact. It’s Intrinsic Perk, Cryocannon, also lets you hold to charge the weapon to fire projectiles that will freeze an area with Stasis crystals, which will be good for crowd control.

Salvation’s Grip also comes with the Flash Freeze Trait, where charging this weapon increases its freeze radius and the amount of Stasis Crystal created.

It’s worth noting that Salvation’s Grip is the only weapon that can destroy Entropic Shards, which you’ll need for later. It’ll be very useful for Stasis-related missions later in the season, so hold on to it.

Now that you know more about Salvation’s Grip, here’s how to get your gauntlets on it.

Destiny 2: Beyond Light – How to get the Salvation’s Grip Exotic Grenade Launcher

To get started, finish the Beyond Light main campaign then it’s off to see the Drifter. He’ll give you The Stasis Prototype quest, where you’ll need to defeat 10 Fallen Captains and 10 Servitors on Europa to collect intel. Head to the Asterion Abyss, Cadmus Ridge and the Eventide Ruins to find all the enemies and complete this step. 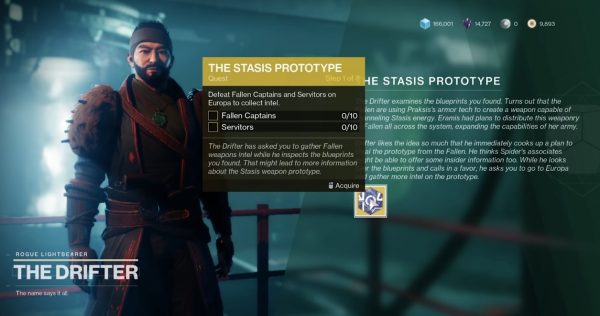 Next, you need to complete an Empire Hunt, so pick up The Dark Priestess from Variks. If that option isn’t available, complete the Reclaiming Europa and Empire’s Fall quests, which end in an Empire Hunt and will finish this step for you.

After that, you’ll get the Killing with Stars quest, where you’ll need to defeat 100 enemies using Stasis abilities. You’ll be able to do this no problem by completing Public Events or Patrols on Europa or any of Variks’ Sabotage missions. You can do it at any location, though, if you need a break from Europa.

After that, you’re off to meet Spider in the Concealed Void Lost Sector in the Asterion Abyss – see the video at the top of the page to help you find it. Complete the Lost Sector, loot the chest and when the barrier drops, you’ll meet one of Spider’s minions who’ll give you Skiff Codes. 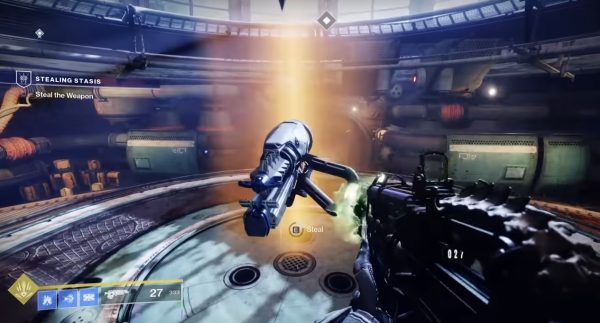 Head back to see the Drifter and he’ll give you the Stasis Containment Device. After that, head back to Europa to see Variks and get the Stealing Stasis mission, where you’ll eventually find the Salvation’s Grip Grenade Launcher. Speak to the Drifter once more to finish it all off.

For more Destiny 2: Beyond Light guides, check out how to get the Duality Exotic Shotgun here, as well as the No Time to Explain Pulse Rifle, how to get the Fang of Xivu Arath Artifact, how to unlock Stasis and where to find the Perdition Lost Sector.