Solstice of Heroes is back in Destiny 2 and there’s a new set of armour to get your hands on.

The Solstice of Heroes summer event goes live after today’s weekly reset, and after logging in for the first time after the update, you’ll receive a shiny new set of armour.

As this is Destiny 2 we’re talking about, you’ll be able to improve and upgrade this armour by completing various tasks over the next few weeks, particularly in the European Aerial Zone limited time area.

The update is available for all Destiny 2 players, and each day the featured element will change. That’ll give you plenty of opportunities to complete challenges that require you to use Solar, Void or Arc powers.

Your armour will begin at Renewed and can be upgraded all the way to Majestic. There’s also two Solstice of Heroes Triumphs to unlock which involve collecting said Majestic armour and earning an armour glow on any rank.

The event runs from August 11 – September 8, so let’s get started.

Each armour piece can be upgraded individually by completing certain requirements. The majority involve completing EAZ runs and defeating enemies, as well as defeating enemies in Crucible and Gambit matches, using specific subclasses and your Super to defeat enemies and collecting Orbs.

The more Fallen, Hive and Cabal you kill, the more loot you’ll get and the faster you’ll progress, as is common with all limited-time events in Destiny 2.

Getting the armour glow has its own special requirements, which you can check out below: 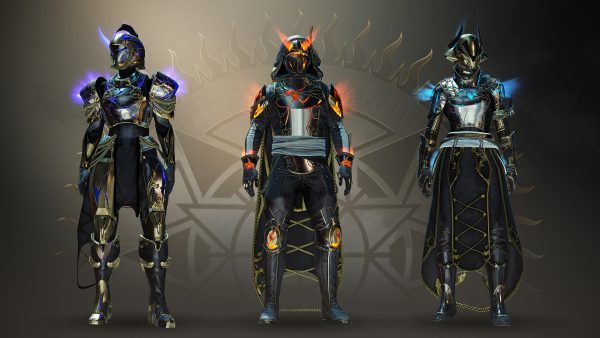 It doesn’t matter what class you play is, the conditions remain the same, so grab a few pals and jump in for some summer fun. You’ll also be able to use Silver and Bright Dust to add an elemental ornament to your armour, which will make it glow in different colours if that’s your jam.

Your Majestic armour will also be “relevant” until next year’s event, as the elemental glows will be made into Universal Ornaments, meaning that you can use them on any high stat armour you own going forward.

All players who finish The Solstice Begins quest will unlock a free Solstice of Heroes music track and you can log into your Bungie Rewards account to learn more.

Alongside this new armour, there’s also a bunch of new cosmetics including a Ghost shell, new Sparrow and finishers.

Destiny 2: Beyond Light has been delayed until November 10, so in the meantime, you can check out our Destiny 2: Season of Arrivals guides below, like how to complete the Prophecy Dungeon.

You can check out the Season of Arrivals roadmap here, as well as everything we know about Destiny 2: Beyond Light.

If you’re just getting started with Season of Arrivals, check out our guides on how to unlock Contact Public Events, earn Umbral Engrams and complete the Means to an End questline, how to get the Witherhoard Exotic Grenade Launcher and unlock the Seed of Silver Wings Artifact.

If you’re new to Destiny 2, you can check out our Forsaken guide here as well as how to find Lost Sectors and cache codes.