If you’d asked me six months ago who all those specialist flight simulator peripherals were for, I would’ve just said, y’know, actual pilots. The hardcore flight simulation people. The nerds. But beware of how blissfully brilliant Microsoft Flight Simulator’s latest outing is: it’ll turn you into one of them too.

I used to look at all this specialist hardware with curious bemusement. I’d visit the Mad Catz meeting room every E3 to hear the latest updates in the world of arcade sticks, but I’d always breeze past the massive, Saitek hardware-packed, full cockpit demo machine. It was always enough to make me stop and go ‘this is cool’, but never enough to get me to buckle up for a test flight.

What I needed, I suppose, was an accessible, impressive game. The sort of thing that can make a flight simulation convert out of even the most clueless would-be pilot. The new game from Xbox and Asobo Studio is exactly that, but it’s also an experience vastly enhanced by the peripherals on offer. So now here I am – with an Amazon wishlist full of accessories like realistic yokes, pedals, and modular panels – and several already piled up in my office.

Don’t get me wrong – this is an expensive business. For most significant additions that’ll level up your flight sim experience you’re looking at at least $100 an item – and if you want to get into more premium and therefore more satisfying stuff, that number can double or even triple. For pedals, the item most in need of hardier build-quality, you could stretch to over $500. This stuff is big business.

That explains the report over the weekend revealing it’s expected this new game will drive $2.6 billion in new hardware sales. Prior to playing Microsoft Flight Simulator I would’ve been shocked by this, but now I’m not at all. Given so much of this technology comes piecemeal, it can be a slippery slope to spending four figures – but it also handily means you can just buy the bits you care about.

The best starter accessory for Flight Sim: a yoke or joystick

The first key accessory you’ll want to start out with is a more natural input device for the basic controls of your aircraft. I’ve tried out three: the Honeycomb Aeronautical Alpha Flight Controls, the Logitech Pro Flight Yoke System and the Thrustmaster TCA Sidestick Airbus Edition. All three are great – and as listed, these three range down from the most expensive and luxurious to the most simple, cheap and cheerful.

The Honeycomb Aeronautical yoke is a thing of beauty. It’s solid as a rock, beautifully crafted and just feels great to hold and use. You can pair this with a keyboard and enjoy flight sim quite freely — the keyboard part isn’t realistic, but the most difficult element of flying – keeping a plane level and steady – becomes so much easier with a yoke it isn’t funny. This is the most expensive of the three, however, and it also doesn’t come with a throttle section, leaving that to the keyboard. Honeycomb will be selling an equally lavish-looking throttle separately come October.

The Logitech Pro Flight Yoke System is actually technically a Saitek product; when Mad Catz was self-destructing, the previously-mentioned Saitek brand was plucked from them by the PC accessory experts at Logitech. It’s flimsier than the Honeycomb device but still quite impressive-feeling, a large thing that’ll dominate your desk while imparting a real boost to the realism of the simulation.

It also comes with a throttle, which makes this a particularly friendly and attractive all-in-one package for the basics. For multi-engine aircraft you can also pick up a second throttle relatively cheaply – it all then connects together to give you an extremely comprehensive basic control setup. This is also one of the few parts of the Logitech flgiht sim peripheral range that is presently instantly recognized in Flight Simulator for easy use, however – more on that later.

Finally, there’s the more traditional and potentially more widely useful option: a joystick, often properly referred to in aviation as a sidestick. This still more accurately delivers on the sensation and specifics of flying, but it is worth keeping in mind that most of the aircraft featured in flight sim use a yoke, so it generally won’t be cockpit-accurate. With that said, joysticks are a lot less intricate than yokes – which makes them cheaper, as well as smaller and easier to store. If you’re not building a cockpit and are just playing flight sim at your PC desk with less space, it’s the ideal solution.

In testing, I tried out the Thrustmaster TCA Sidestick, a new release that’s covered in official Airbus branding. It’s a lovely piece of kit – sturdy, with a lockable twist rudder function. It’s more basic but also completely serviceable, and by its very nature as a joystick is more easily portable to other games. You could set this up in Elite: Dangerous, for instance, whereas a Yoke will feel less at home there – and that versatility is handy, and a fair trade-off for the flight-sim accuracy in yoke-controlled aircraft. Thrustmaster also has a matching Throttle on the way, releasing in around a month. 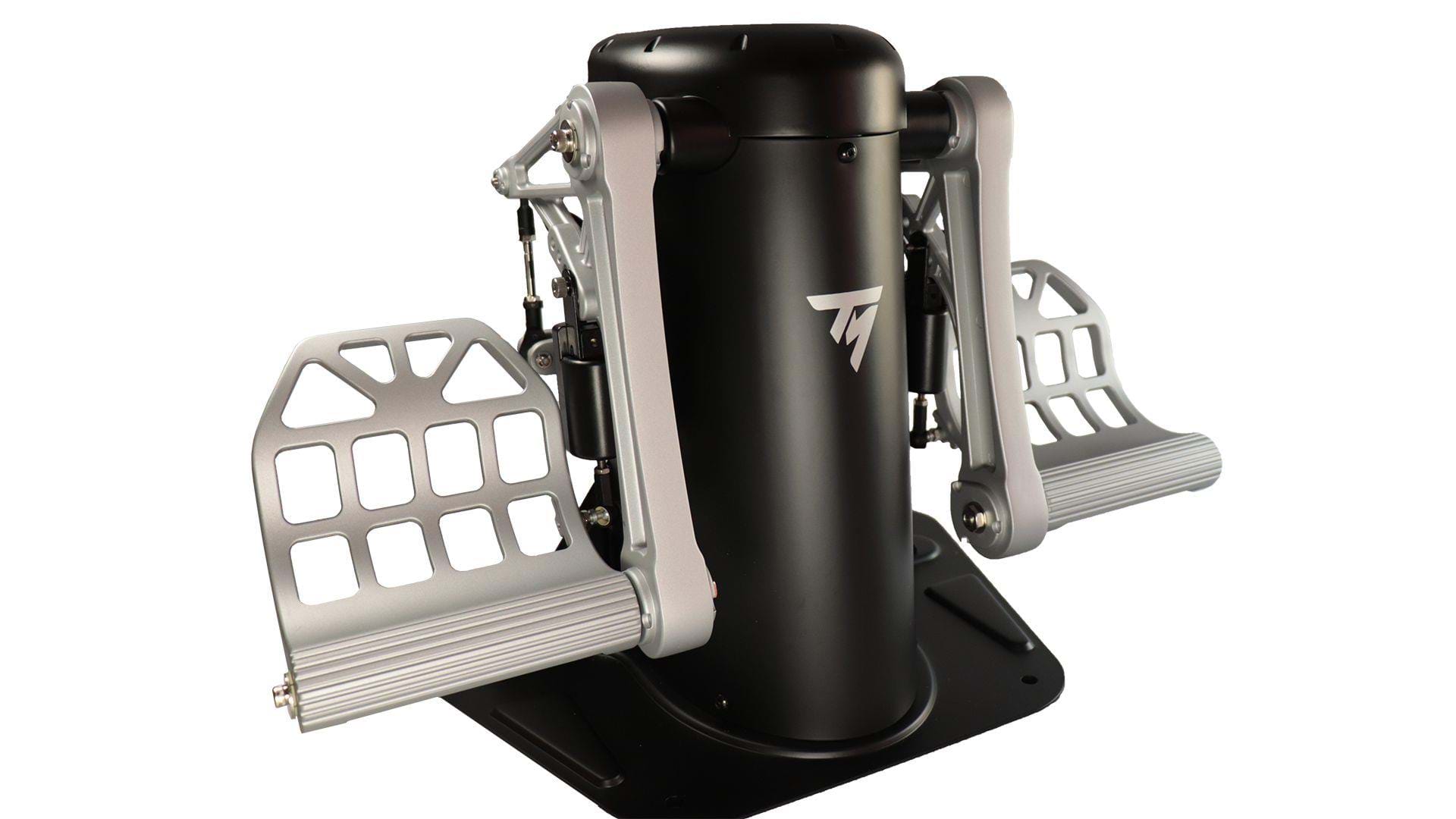 The next step up from a yoke or sidestick is to pick up some pedals. Pedals control the rudder of the aircraft and in some intances some other functions – primarily they are for a steering assist. You’ll most keenly feel the addition of pedals before you take off, incidentally – they get a whole lot of use when you’re taxiing to your designated runway. Even in the air, however, they have a big impact.

Pedals are often the most overlooked flight simulator accessory, and not without good reason: they start at over $100 at a minimum, and they’re relatively boring when described; you press them with your feet and they help to steer the aircraft; big whoop.

But seriously: pedals are major. They’re equally as transformative of the flight sim experience as having a yoke or a sidestick, because it makes one of the most challenging aspects of flying – manuvering the aircraft smoothly – much easier.

Like I said, pedals range greatly, and most manufacturers have basic and heavy-duty options. The basic ones are mostly plastic in construction, and that means if you’re too overzealous you could break them. The heavy-duty pedals can take some serious punishment – but they come with a punishing price.

For instance, Thrustmaster has the T. Flight Rudder Pedals for a reasonable price – but if you’re willing to pay quadruple the price you get the heavy-set, sturdy and sublime Thrustmaster TPR Pendular Rudder – which is mindblowingly smooth to use.

Probably the most attractive of all the flight simulator accessories are the modular panels that can be used to expand your sim experience by bringing pieces of the in-game cockpit into your real-life setup. King of these products, an industry standard, is the Logitech G Saitek Pro Flight Instrument panel – a staple of hardcore sim fans for many years.

But stop! Here’s the rub: these things don’t currently work in Microsoft Flight Simulator 2020. At all.

That goes for the Instrument Panel (which you can have multiple of to bring flight instruments into the real world), the Multi Panel (for controlling auto pilot, flaps and more), the Switch Panel (featuring engine ignition, landing gear and many other cockpit controls) and the Radio Panel (for chatting to ATC more naturally) – none of them work.

This is especially a bummer, as they’re some of the most attractive flight sim accessories going. Even if you’re perfectly happy flying with an Xbox contoller – a completely valid way to play – you can get some joy out of having your altitude or other instruments displayed in front of you, but off-screen – and that isn’t presently possible with these most popular, common and accessible of peripherals.

We fully expect the advice to avoid buying these accessories to be temporary. There’s already movement from fans asking Microsoft and Logitech to provide support in the form of a patch or driver – in truth, it’s likely only a matter of time. But for now, you need to avoid these accessories – it’ll just be a waste of money.