I crack my fourth can of Guinness and pour it. While I’m waiting for it to set, I tell my mate that acacia planks aren’t good enough — we need dark oak, like the real thing.

I’m a grumpy architect, but at least I’m efficient. See, the four of us — myself, Ciaran, Aaron, and Alan — are building our local pub in Minecraft. It’s closed at the moment, and even if it wasn’t we’re all reasonable enough to stay at home. That doesn’t mean I don’t miss it.

I’ve spent many an evening in Smyth’s over the last few years. Skulling a pint of Guinness here, polishing off a Jameson there, losing more games of pool than I win and hijacking the jukebox with tunes nobody likes except me. But the last couple of weeks have been a change of pace, and it’s been a bit weird.

So we had the bright idea to stock up on beer and have a virtual meetup. Not just a Skype call, though, or a chat over Discord. A proper rendezvous in a virtual rendition of our favourite watering hole. Easier said than done, as it turns out, because you’ve got to actually build a pub before it exists for you to drink in. And we’re stubborn, so we said we’d do it ourselves, in Minecraft, and that Creative was a no-go. Creepers abound, we’re dead set on digitalizing the best blocky boozer ever built.

It’s anticlimactic, at least at first. I spend hours collecting sand with the goal of refining it into cut sandstone (Smyth’s is actually constructed from some strange form of 300-year-old white rot, but that material doesn’t exist in Minecraft, so cut sandstone it is). It starts off okay, because I’ve got a diamond shovel, but it very quickly becomes not-so-okay-anymore, because I fall about 8km to my death in a fiery pit of lava with approximately 600 pieces of sand on me. Not mad, just disappointed.

One of the lads cracks a joke and we’re all good again. This is the beauty of boozing from home, isn’t it — yes, we’re building a pub to get smashed in, but we’re also not necessarily tied to any health and safety regulations because it’s a Minecraft pub. We can get pissed as we work, and to be honest, who cares if we even finish (actually, I do, I genuinely am quite a grumpy but efficient architect).

Eventually we get the walls built and slot a lovely pair of double doors into the front. That’s enough for one night, because we’re safe from all the monsters, and that counts as a win worthy of celebration. Plus we own the pub, so we can serve ourselves. 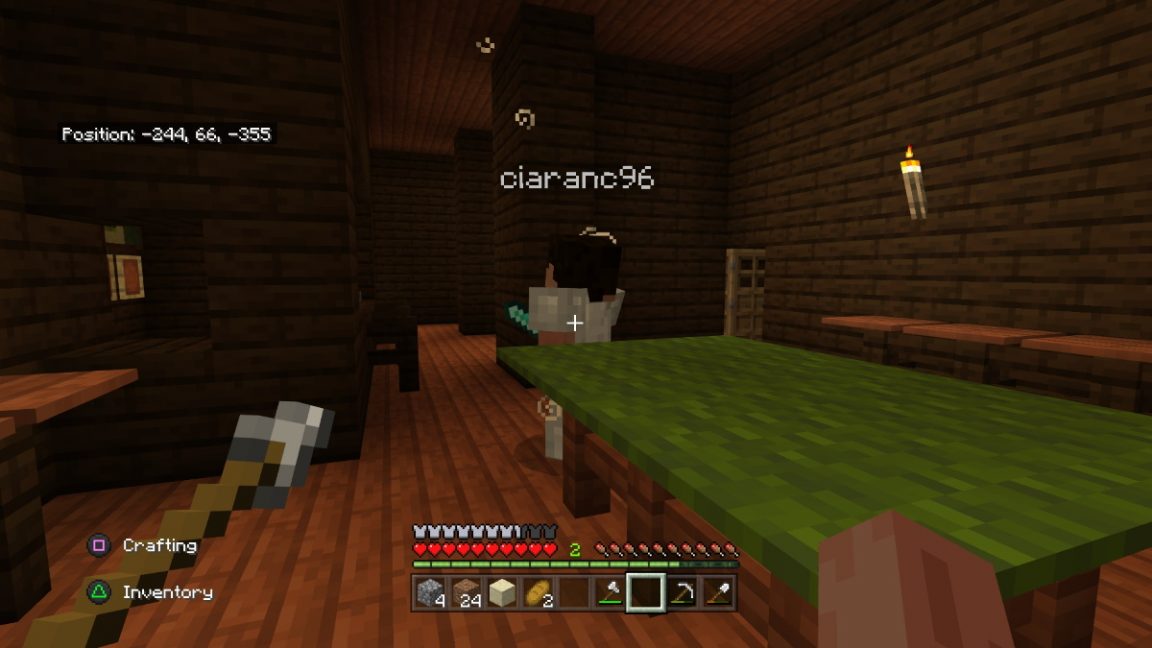 Two of my fellow builders are actually studying in France at the moment, so they’re an hour ahead. They’ve moved onto wine because they ran out of beer, whereas I’ve moved onto I can’t really remember what because the two packs of Guinness I bought disappeared at some point during the last five or nine hours. Anyway, there’s a lot of shite talk going on, which means this dive-to-be truly is channeling the spirit of our beloved Smyth’s. The wonders of virtual construction are unquantifiable, I think to myself, as are the wonders of drowning in a wall because I’ve climbed onto a horse in the doorway and got my head stuck in the ceiling. It’s probably bedtime.

Banging headache when I wake up, to the extent that I think, “shit, did I go to Smyth’s last night?” I did, yeah, Minecraft Smyth’s. I soldier on through some work, but before long it’s high time to get back to what’s really important: interior decoration.

I’m in charge at this point, because after an informal vote it’s decided that I’ve probably spent the most amount of time researching the real deal, i.e. the most hours drinking in Smyth’s. So I make the calls — dark oak walls and flooring, yeah, and we’re gonna use cauldrons for toilets. Two pool tables in the back, one in the far right corner where all the barrels and candles are, the other in the room that leads out to the smoking area, right next to the jukebox. Make sure there are little windows either side of the bar, as that’s where you get served fast when blow-ins go up to queue properly, and we’ll use a cartography table for the smoke machine, because we can pretend paper is just Minecraft Rizla, or something. 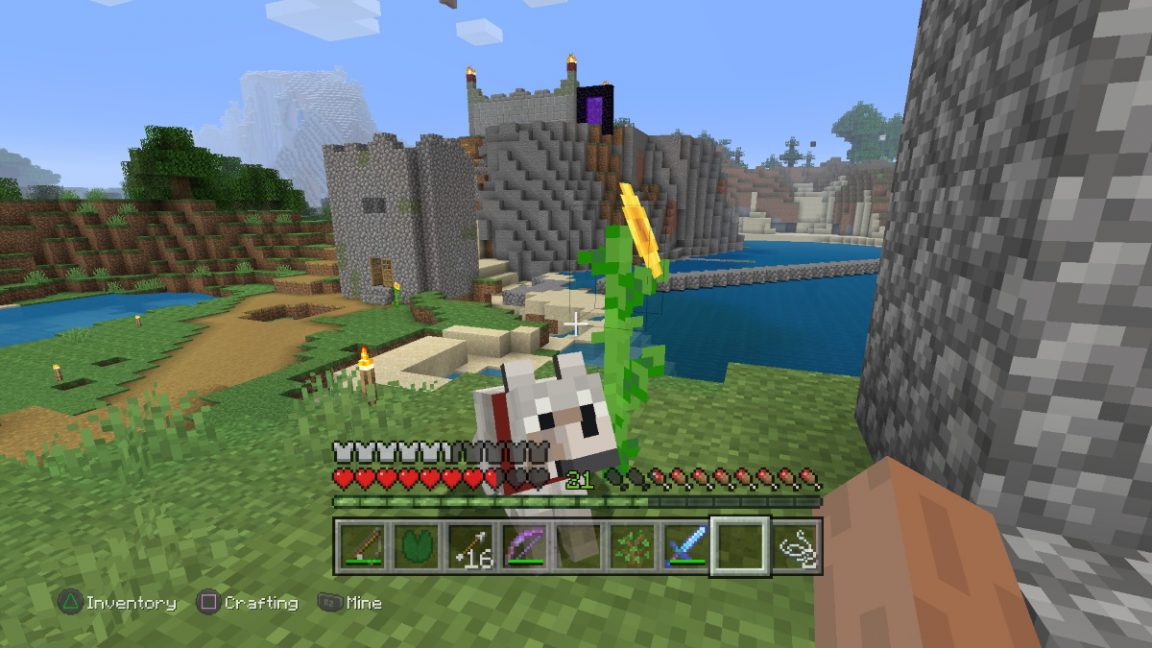 Anyway, we’re just about wrapped up, right, and I start screen-recording while giving a sort of virtual guided tour, when all of a sudden some lad with a crossbow rocks up and starts going ham on me. Here in Ireland, we’d likely call him an “undercover,” as my best guess is that he’s a plainclothes police officer here to wreck us for drinking on the job. I run away, but he’s still in there, lying in wait, ready to pounce on us the second we think the coast is clear. Joke’s on him — we’ve got a trump card.

Right, so there’s some exposition necessary here: real-life Smyth’s has one of the most stupid architectural features on planet earth, in that the upper floor has a door built into the wall. So when you open it, it’s just a straight 15-foot fall into the smoking area. The manager usually opens it and puts a speaker in the doorway (this works better than putting it outside or at ground level, because nobody goes upstairs in Smyth’s, because there’s nothing there except a derelict bathroom and this weird door).

So I stiffen up my upper lip and storm the pub, completely unaware as to where this undercover is hiding. After a quick reconnaissance lap of downstairs, I realize I could be in trouble — if he’s upstairs, which is totally flat, he’s likely cooped up in a corner, ready to loose an almighty bolt into my drunken skull the second my crown shows in the stairwell.

But he doesn’t know about the door.

So I leg it upstairs and take a bolt to the chest. I move quickly enough so it doesn’t hit my head — that only would have happened if I tried to sneak up on him — but this attack is the will of a pissed drunk berserker. I swing my diamond sword left, right, and centre, connecting a grand total of zero times in my drunken frenzy, but it matters not — with every swing, he edges closer towards the open door. And then it happens — a clean connection, followed by a backwards fall, and we’re in the money. Smyth’s is ours again, interior and all.

my local, smyth’s, is coming along nicely. there’s even some lad standing on a table next to the jukebox pic.twitter.com/Y5SECG08bo

You wouldn’t have these sort of valiant adventures in a real-life pub, would you? In reality, this kind of carry on would be called “rude,” or “illegal.” At this point I’m secretly enjoying myself at least as much as I would in an ordinary pub. I even put in a beer garden, complete with picnic benches and a bandstand, and think, alright, there’s a real possibility I like this Smyth’s more than the proper one, because I can get eight cans of Guinness for a tenner from the shop and drink them here, in my virtual pub, or spend €4.70 for one pint in the actual one. And the lads from France can drink here, too.

After the first few days of staying at home, I was a bit antsy. I’m quite extroverted and was worried about having to stay inside. I go to the pub a few times a week purely to socialize, and its closure made me a tad anxious. But, and this is important: you don’t have to leave your house to go to the cinema, or the gym, or the pub. You can watch Netflix at home and make microwave popcorn. You can do Saitama’s workout, if you’re sufficiently insane.

Or, if you can’t go to the pub, you can build it in Minecraft. The best part? There’s no, “you’ve had one too many,” or, “what do you mean you only have a fiver.” It’s just you and your mates, cracking blocks with pickaxes, falling 8km into molten lava pits, and sharing a few lovely beverages with one another regardless of how far apart you are in real life.

Honestly, my nights out in Minecraft Smyth’s so far have been some of the best I’ve had in a long time. If you, like me, are missing your local — why not build it? Invite some pals, crack some cans, and just have a laugh. You never know — virtual pubs could be the next big thing.