It’s easy to forget about Artifacts in Minecraft Dungeons, but they can make all the difference in the game’s toughest fights.

There are lots of different types, but the best Artifacts in Minecraft Dungeons provide reliable, powerful effects that turn the tide of battle strongly in your favour.

While it’s fun to stick with your favourite effects, as you level up through your first playthroughs of Minecraft Dungeons, it’s important to equip yourself with the highest power level Artifacts to keep your character progressing – regardless of whether you’re in love with a particular Artifact or not. Soon enough you’ll find another one.

Or you can just roll the dice at the Wandering Trader to get some better gear.

With that said, there are some very powerful Artifacts that can be worth holding onto. 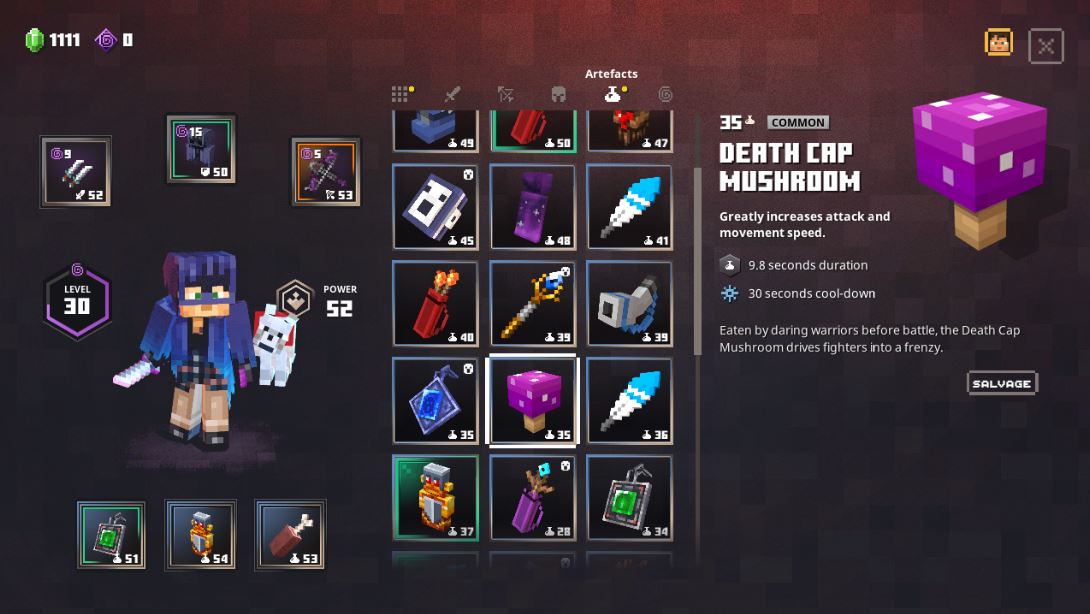 There’s really no downside to the Death Cap Mushroom. It consistently lets you dish out more damage and greatly improves your movement capability with a short enough cooldown to use in just about every fight in the game.

The Death Cap Mushroom combos well with all sorts of weapons – which we have a page on the best weapons in Minecraft Dungeons, here.

It allows slow, powerful weapons to better deal with large groups of enemies thanks to the attack speed buff.

But it also helps fast weapon characters close the space between targets more quickly. This is hard not to recommend. 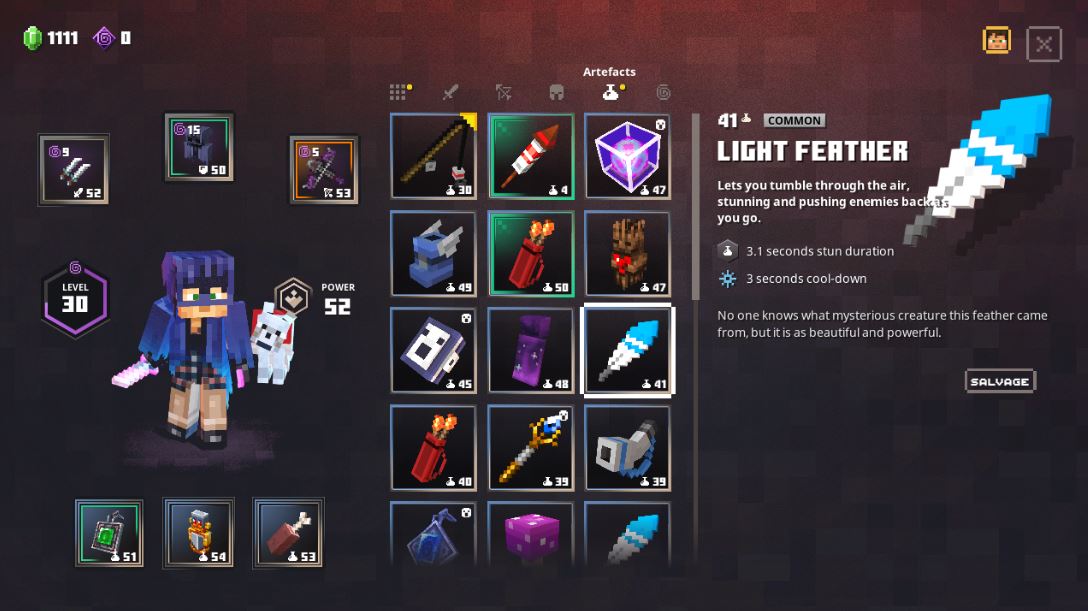 Increased movement and stunning enemies are both very powerful, and the Light Feather packs both with a lightning fast cool down.

Because it works on multiple enemies, the Light Feather’s stun can really help deal with large groups of enemies if you’re using a fast weapon with low reach.

The fast cool down also makes the Light Feather good for backtracking to find secrets – and we have a list of all the secrets and chest we’ve found in Minecraft Dungeons, here. 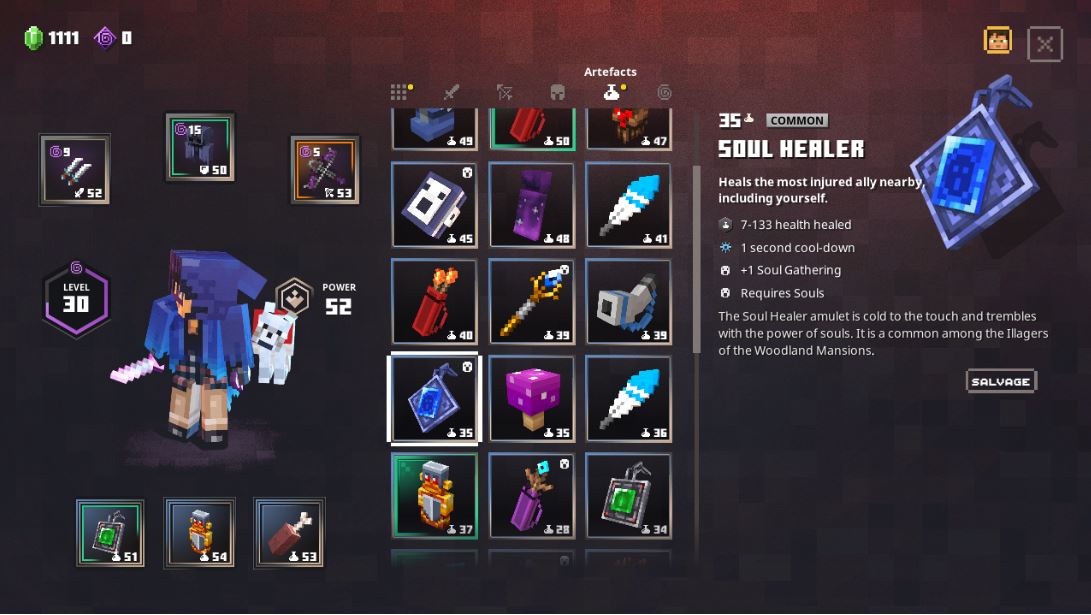 Your default health potion is very strong healing, especially when paired with the Potion Barrier Enchantment. We have a full page on the best Enchantments in Minecraft Dungeons, here.

However, its glacially slow cool down can let you down in tough situations – especially in boss fights. This means it’s great to have an additional source of healing to round out your build.

The Soul Healer is fast, reliable, powerful healing which you can trigger multiple times when you’re in a tough spot.

Since it’s powered by collecting Souls, it recharges quickly when you’re fighting lots of enemies – which is luckily when you will need it most. 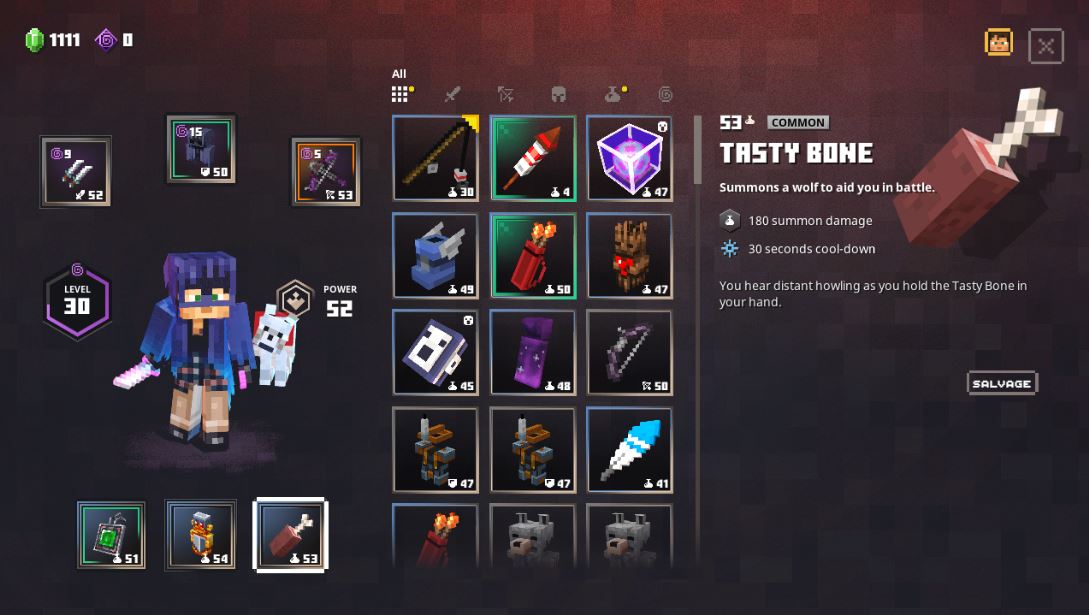 I feel like the two summon Artifacts are a matter of personal preference. The cure llama summoned by the Wonderful Wheat seems to have more health and stick around for longer, while the Tasty Bone wolf deals more damage.

If you’re happy to keep on eye on whether your animal partner needs re-summoning all the time, go for the Tasty Bone. But if you want a friend who can look after themselves, consider the Wonderful Wheat. 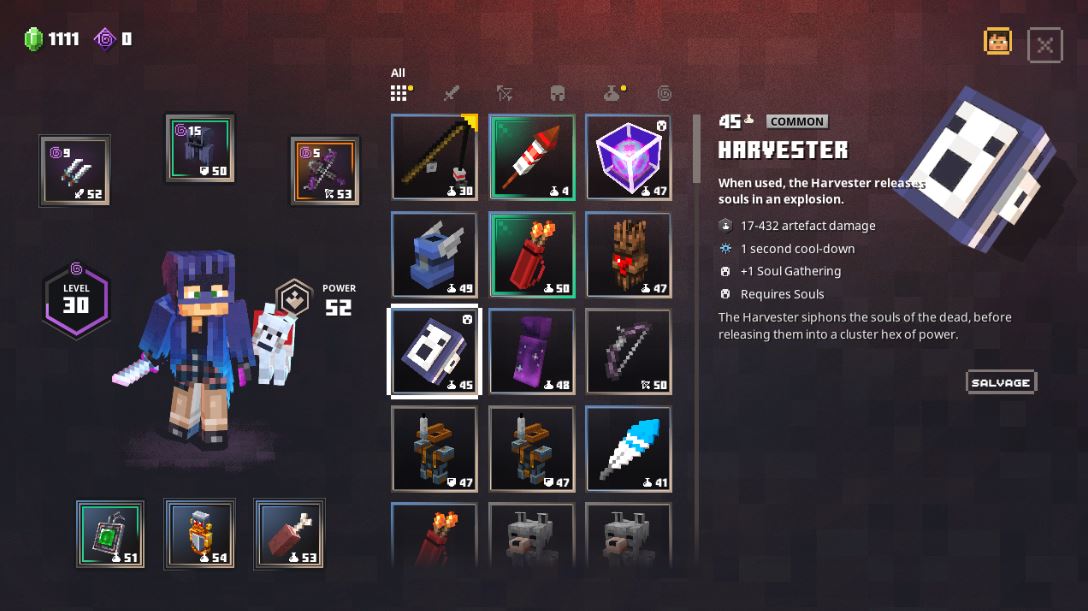 If you rush into a group of enemies too quickly in the later game, it’s easy to get overwhelmed.

This makes the Harvester a great Artifact for getting out of trouble in a sticky situation. Its large, powerful explosion is usually enough to deal with smaller mobs. Then its knockback gives you the breathing room to reposition away from tougher baddies.

While the Lightning Rod isn’t as versatile as other Soul Artifacts, I’ve found it particularly useful when fighting bosses and other large enemies.

Because you can use it at a distance, you can farm Souls from weaker mobs while staying away from the tough enemies – but still chip away at them with the Lightning Rod.

For more on Minecraft Dungeons, check out our page on the best armor in the game, here!