Resident Evil is best when it makes a resident of you, the player.

You start each game fumbling around its haunted houses – whether they’re extravagant mansions or museums that have been turned into police stations – and eventually you become so familiar with them that they feel like home. Resident Evil 3 Remake feels more like a single room in a Travelodge.

Resident Evil 2 Remake’s Raccoon City Police Department was so well realised that it was always going to be difficult to top, but this sequel feels like a step backwards in almost every way.

Rather than a few intricate but large spaces, there are more areas with less intricacy. You’re often following a linear path to the next cutscene, of which there are many. If Resident Evil 2 Remake is a haunted house, Resident Evil 3 Remake is a rollercoaster at Alton Towers – let’s say Nemesis for thematic consistency.

Nemesis is the new Mr. X, an unkillable enemy who stalks you throughout the game. You can delay him by hurting him, but he still pops back up to ruin your day. Strangely, he’s only active in emergent sequences for a tiny portion of the game, and mostly shows up in scripted scenes or boss fights. He’s woefully underused. It’s probably for the best, mind you, because he makes Mr. X look like Mr. Motivator.

Not only is Nemesis faster and more agile than Mr. X, he can pull you towards him from a distance with his meaty tendrils. He can leap over your head and cut off your route. He can sprint after you and punch you in the back of the head, like a prick. He’s a nightmare, basically. Not a good nightmare, either. One of those annoying nightmares that make no sense, like a terrifying plughole.

It doesn’t help that there are far more zombies in the streets of Raccoon City than there were in RCPD either. They’re everywhere, and avoiding them is often the best course of action. You can kill as many as you want, but the streets will still be crawling when you backtrack later on.

Resident Evil 2 Remake allowed you to mitigate some of this by barring up windows or clearing routes, but this sequel has none of that. Outside of item management, you can’t prepare for later sections.

The rules also aren’t as consistent. When you return to the police station from Resident Evil 2 – a tiny, linear route through the West Corridor – zombies can bash through doors to get to you. It’s the same in the hospital. But out on the city streets and in the apartments and shops dotted around, they apparently forget how to use doors. 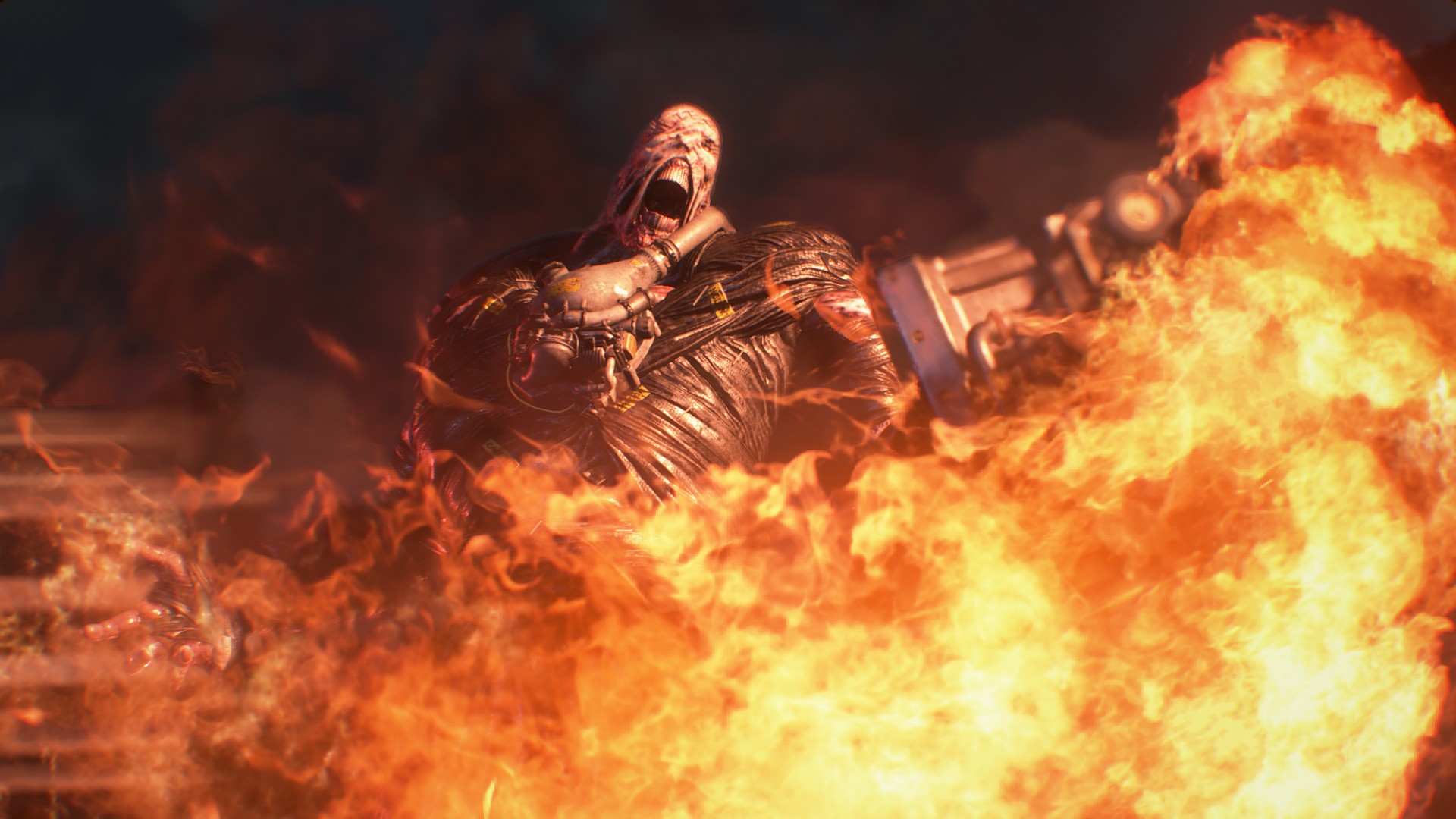 Then there’s the gore, which isn’t as developed as it was in Resi 2. In that game, zombie meat would slide off the bone if you shot an arm. Limbs would break and crack as bullets severed the bones. Most of this is gone, and shooting feels less impactful as a result. Since Resident Evil 3 Remake is much more action-oriented, you’d hope for combat to be improved, but it just doesn’t feel as satisfying – a big shame when you’re gunning down 20 zombies with an assault rifle that feels like a pea shooter.

The only other change to combat is that now your knife and grenades can’t be used as last-chance saves when a zombie grabs you. Here you’ve instead got a combat roll when you play as Jill, so you can evade incoming attacks. Time it right and time slows, allowing you to slip away. When playing as Carlos, the roll is replaced by a punch, which is functionally the same but it sets you up for some slow-motion gunplay instead.

It’s in those dual protagonists where Resident Evil 3 Remake actually feels like an improvement. Carlos and Jill look human, where Leon and Claire looked like sex dolls. They even act and emote in a human way, apart from that one time Carlos says, “There you are, dickface” to a licker. Carlos is a thirsty little bastard throughout, and Jill is an uncompromising badass. I would also give anything for Carlos’s hair. In fact, I’m still pissed off that there isn’t a mode where you escape the city as his hair. Like Resident Evil 2’s playable Tofu, but just hair with a gun. Hair. With. A. Gun. Capcom, hire me. 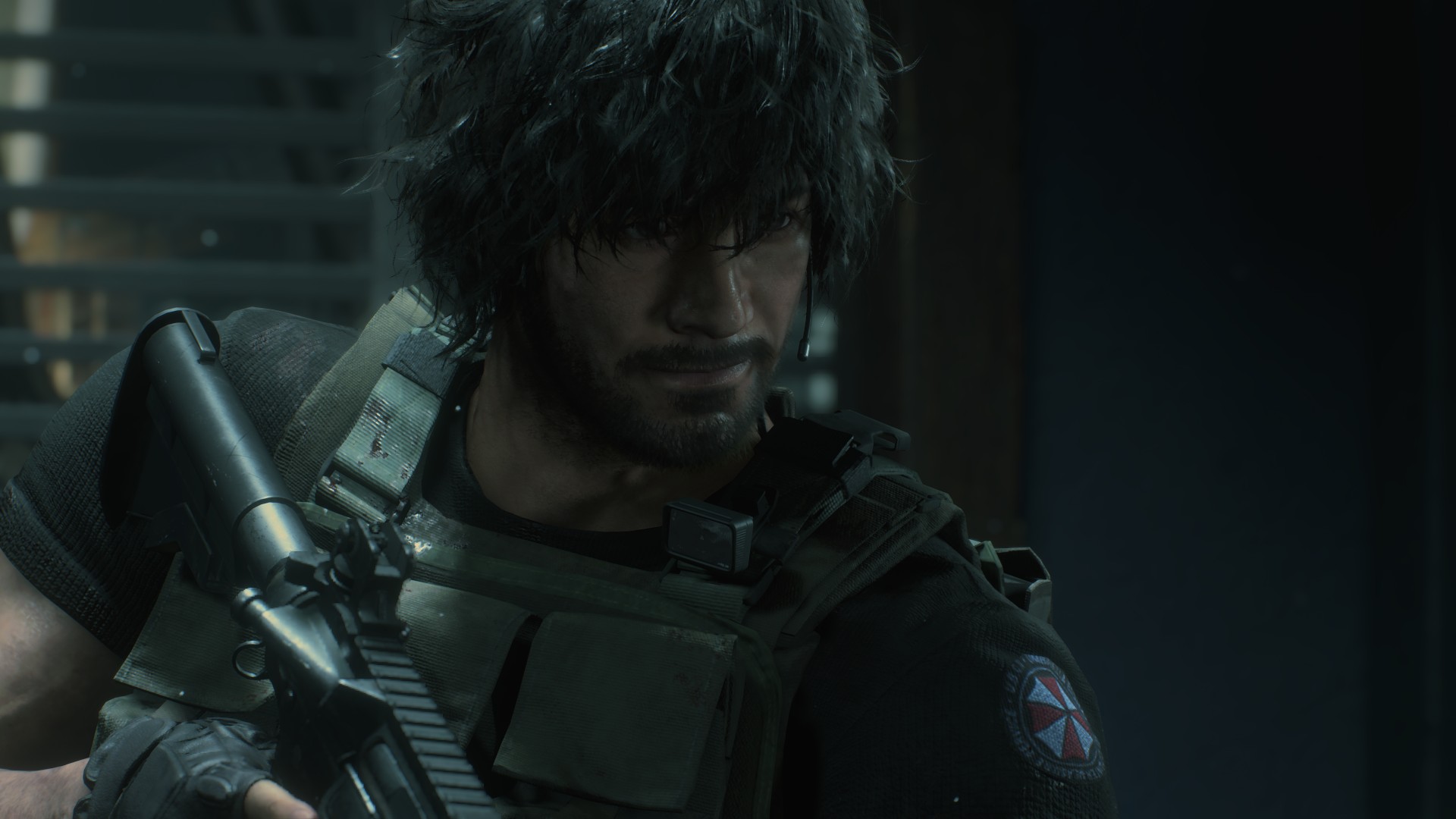 Speaking of Tofu, that’s another thing that’s missing from Resident Evil 3 Remake – unlockable modes upon completion. One of the best things about the PlayStation original was its arcade-style Mercenaries mode, but that’s not included. Instead you have a series of in-game challenges that earn points to spend on weapons, outfits, items, buffs, and other bits you can use in subsequent playthroughs. But the more linear structure of the game makes it hard to care about playing through more than once – it’s too predictable.

While this review is focused on the single-player, I have to mention that it also comes packaged with Resident Evil: Resistance, an asynchronous multiplayer mode where survivors try to escape a map while another player attempts to thwart them with zombies and traps. Its inclusion feels like an acknowledgment of how content light the main attraction is.

It’s still worth playing, but Resident Evil 3 Remake is a step backwards for Capcom, coming off the back of one of the best games of last year. It’s gorgeous to look at, the jump scares will get you, and it’s like stepping into a comfy pair of slippers. But even though your feet are cosy, it never feels like home.