The Pangolin is a scaly anteater that looks a little bit like the Pokemon sandshrew, a little bit like every creature that ever gave you a sidequest in an RPG, but mostly entirely unlike anything else, except other pangolins.

They’re also the most illegally trafficked mammal in the world. Keep in mind the world ‘trafficked’ here, though. America eats as many cows in a year as pangolins were poached in the ten years between 2004 and 2014, so unless you’re working on some scale of morality that scores animals that look like Pokemon more, it’s spurious and lazy to fling accusations of rampant carnism outside the West.

It’s partly those same accusations, and partly fact, that have led the pangolin to being labelled patient-zero as the source of Covid-19. Seems like these poor scaly bois can’t catch a break, so I’ve spent the last couple of days building them a place to chill. Thanks to Planet Zoo, I’ve done it all while self-isolating.

“The pangolin has been incorrectly labelled patient-zero as the source of Covid-19. These poor scaly bois can’t catch a break”

Here are some facts that Planet Zoo has taught me about Chinese Pangolins. They’re fully grown at just two years old. They have a life expectancy of around 13 years. They’re the only mammal with scales. They don’t have teeth, instead swallowing small stones which they keep in their stomach to help them grind up food.

Some things Planet Zoo has taught me about pangolins which probably aren’t true is that they like to play with cardboard boxes and small beach balls.

All this reminds me of the best feature from Frontiers’ previous game, Jurassic World Evolution, which I found quite disappointing otherwise, mainly due to its mobile-game reminiscent unlock systems which had you waiting around not doing much for long stretches. The plus side of this downtime was that it gave you a chance to read up on the dinosaurs. So, if you’re staying inside with kids or loved ones, share a love of animals, and have already exhausted all the animal live feeds on the internet, Planet Zoo is a great option. As well as this, Planet Zoo sets itself apart from other management games by valuing conservation and creativity above efficiency and acquisition.

The fantastic Two Point Hospital, which I’ve also been playing a lot of recently, rewards you for thinking like a machine engineer. The goal is to design an efficient, compact conveyor belt to funnel patients in sick one end and cured out the other, extracting as much money from them as possible via inflated diagnosis prices, snacks, and arcade machines. Creativity is a concern only insomuch as the player can invent ingenious ways to extract more value from less space; beauty a concern only so much as it distracts both your patients and staff from the mechanical tedium of the rest of the conveyor belt. You might spend ten minutes working out exactly how many toilet cubicles, sinks, plants, and paintings you can squeeze into a 4×4 space. In Planet Zoo, you can spend (and players have) an entire afternoon designing a panda mosaic for the path that leads your guests to the restrooms. 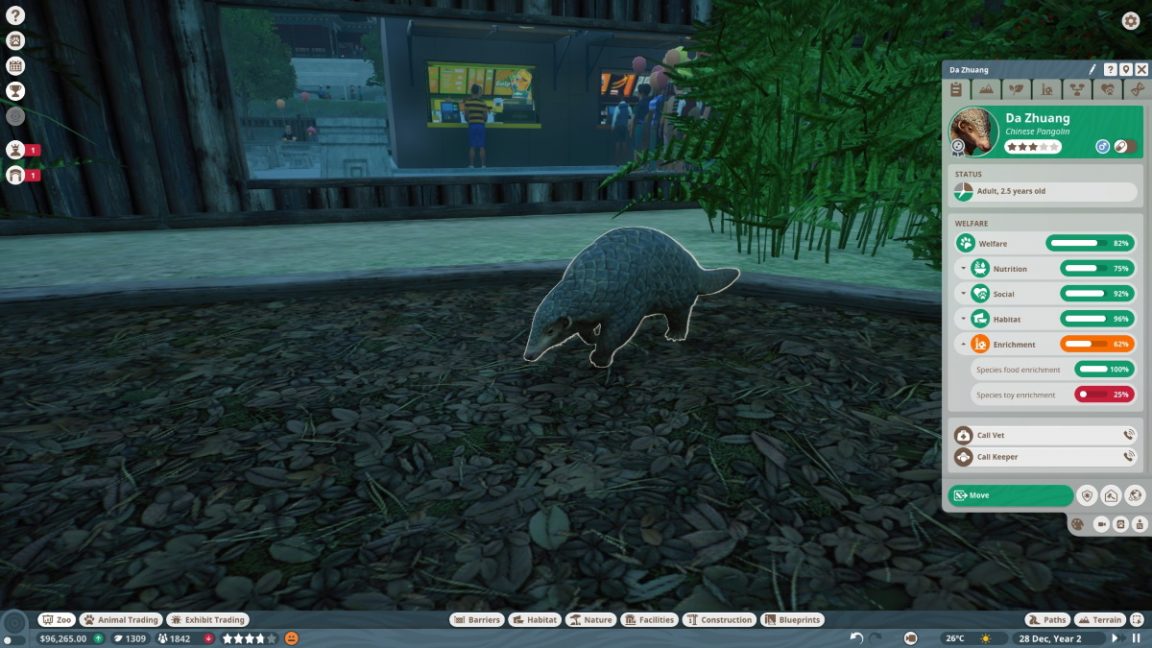 I can download that panda mosaic from the Steam workshop right now, and have it be a part of my zoo with a few clicks. But why stop there? The community has created everything from artful arrangements of shrubbery and rocks to entire exhibits, each plank and stone carefully placed. Some prefabs are available, but the game’s best creations are made brick by brick, like a Lego set. It can be intimidating, at first, but just months after the game’s release, there’s already hours of Planet Zoo tutorials available online. And if you’ve got your learning brain powered down for the day, the Workshop means you can still create a stunning patchwork from what others have shared. I can start with my mate the panda Mosaic, and before long, I’ve organised a collaborative art piece between dozens of creators.

You don’t need to do any of this to succeed. You can keep your guests happy by popping down a tree every few feet, a toilet, somewhere to buy hot dogs and milkshakes, and watch those happiness numbers rise. But that’s like going to the zoo just to hoard items from the gift shop. The tangible rewards are far less important than the experience.

I have two strong memories from visiting zoos in real life. One good, one bad. The good was watching half a dozen monkeys climb on each other’s backs to form a living monkey chain to the ceiling. Although, in hindsight, they could well have just been trying to escape. The bad was watching the proudest, saddest looking Lynx I’ve ever seen laying and staring vacantly into the distance. The enclosure was clearly too small, but from the look on the cat’s face, anything but the vast, boreal forests they call home in the wild would have felt like a prison. And really, why shouldn’t it? This is all to say that I have mixed feelings about zoos in real life, depending on the animal. 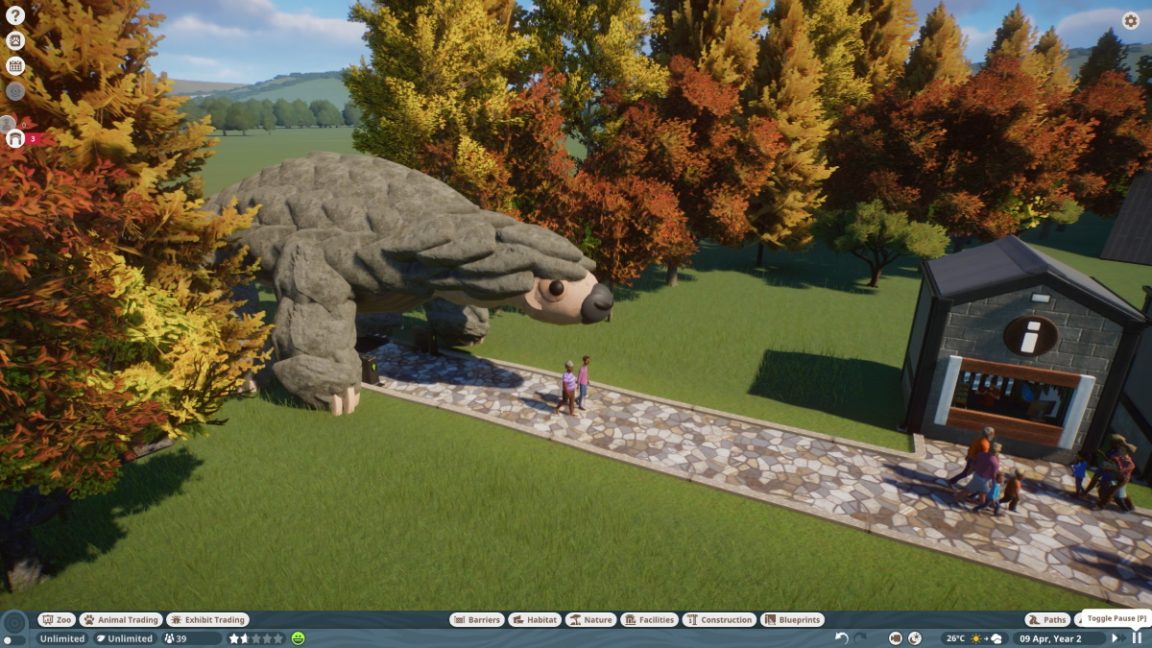 A big part of why Planet Zoo feels different – positive – is how it encourages you to work towards eventually releasing your healthiest, happiest animals back into the wild. This rewards you with a resource called Conversation Credits which you can then spend on opening more zoos. Diseases can be researched and cured, and if you want to, you can create an entire zoo of endangered species. Pandas and pangolins, Ring-Tailed lemurs and Bengal tigers, and focus solely on breeding.

After browsing the workshop yesterday, I found a huge walk-under pangolin statue a user called HauntedIce, from California, hand-built from individual stones. Next I added a pangolin gazebo prieto194 had built from glass and supports. I finished off with a few exhibits built by Bryan Chung, from Singapore, and then I bought myself some pangolins.

A tiny, digital conservation effort, silently collaborated on over borders and oceans, to give a few lines of code shaped like pangolins a home. It makes me smile just thinking about it.