When I saw that The Sims 4 was introducing a new micro-content pack type called Kits, my initial reaction was a deep, weary sigh.

If you frequent online spaces dedicated to The Sims franchise, you’ll probably know that older generations of the game tend to be remembered quite fondly. This is in contrast to the considerably more mixed reactions to the series’ current iteration, which at the moment is The Sims 4.

The Sims 3 vs The Sims 4 is a particularly contentious issue right now among fans of the series. I have my preferences, but I try to keep out of it where possible. Primarily, I’m in fandom spaces to celebrate media I enjoy, not stress over whether other people agree with me on every point. And I do enjoy The Sims, enormously.

However, I’ve always had one bone to pick when unwisely wading into online debates about which game did it worse. The Sims 3 Store parted you with real money in exchange for exclusive content, which could be anything from a new gameworld to a single cosmetic item. It remains, in my opinion, possibly the single worst decision in the franchise’s history. The fact that The Sims 4 did away with the feature was, in my view, one of the sequel’s great improvements on its predecessor.

Back in 2013, purchasing all content for The Sims 3 — the base game, expansion packs, stuff packs, plus all items on the store — would have set you back close to $75,000. (It’s actually more today.) I’m usually a completionist but this is mind-boggling. By comparison, buying all the add-ons released so far for The Sims 4 would cost around $700 — still completely ridiculous, but nevertheless that’s a month’s rent versus a generous 25% deposit on a mortgage.

Looked at this way, the addition of three pieces of mini-DLC for The Sims 4 at $5 apiece isn’t too egregious, even with more to presumably follow. By my reckoning they’d have to introduce at least 15,000 of the things before they caught up with The Sims 3 Store, after all.

But it does seem to mark the slow creeping return of micro-transactions to The Sims, which is definitely something I could have happily lived without — as indeed I have been doing since The Sims 4 came out in 2014.

My intention is certainly not to shame anyone who buys content from The Sims 3 Store, or who likes the look of these Kits for The Sims 4. If it makes you happy and you can afford it, there are probably worse ways to fritter away a few quid.

But I can’t shake the feeling that the introduction of Kits marks a return to what, for me (though obviously not for all players), feels like the bad old days of the franchise. The Sims 4 doesn’t always get things right, but until now they have at least resisted the urge to charge you one actual real dollar to give your Sim a new haircut, even though history had taught them they could do it.

Unfortunately, they will now be charging you one actual real dollar per digital vacuum cleaner. 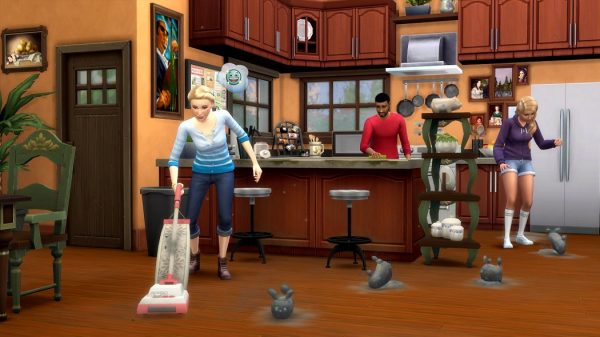 If you’re still curious to see what all the fuss is about, all three new Kits for The Sims 4 — Bust the Dust, Country Kitchen, and Throwback Fit (surely that should be ‘fitness’?) — are now available to purchase on PC, Xbox, and PlayStation.