As you make your way around Colorado, you hear a crackling voice on the radio as you’re transitioning in and out of different areas. The city’s more well-to-do residents have a problem, and only you can solve it.

Gideon Reyes says to come and speak to him at the church in Broadmoor Heights. You can find the new area next to Casady’s Clothes shop to the southwest of Market Square. Approach the gate and the deputy Marshal will speak to you automatically.

Say Gideon Reyes wants to speak to you, and he’ll let you pass.

Inside Broadmoor Heights, the Church you’re looking for is around the corner on your right, in the eastern part of the area.

The door opens automatically as you approach, and behind the door on your right as you enter is another Cyborg Chicken to add to your collection.

Of the named characters further inside, you have Miriam Knox, a Priest of the Final Deluge, and Gideon.

Chat to Miriam Knox to get an extra objective for your quest with Victory Buchanan, while the Priest just spouts flavour text.

Finally, speak to Gideon Reyes to advance. He wants you to stop the influx of refugees seeking asylum in Colorado Springs and isn’t fussy about how you do it. 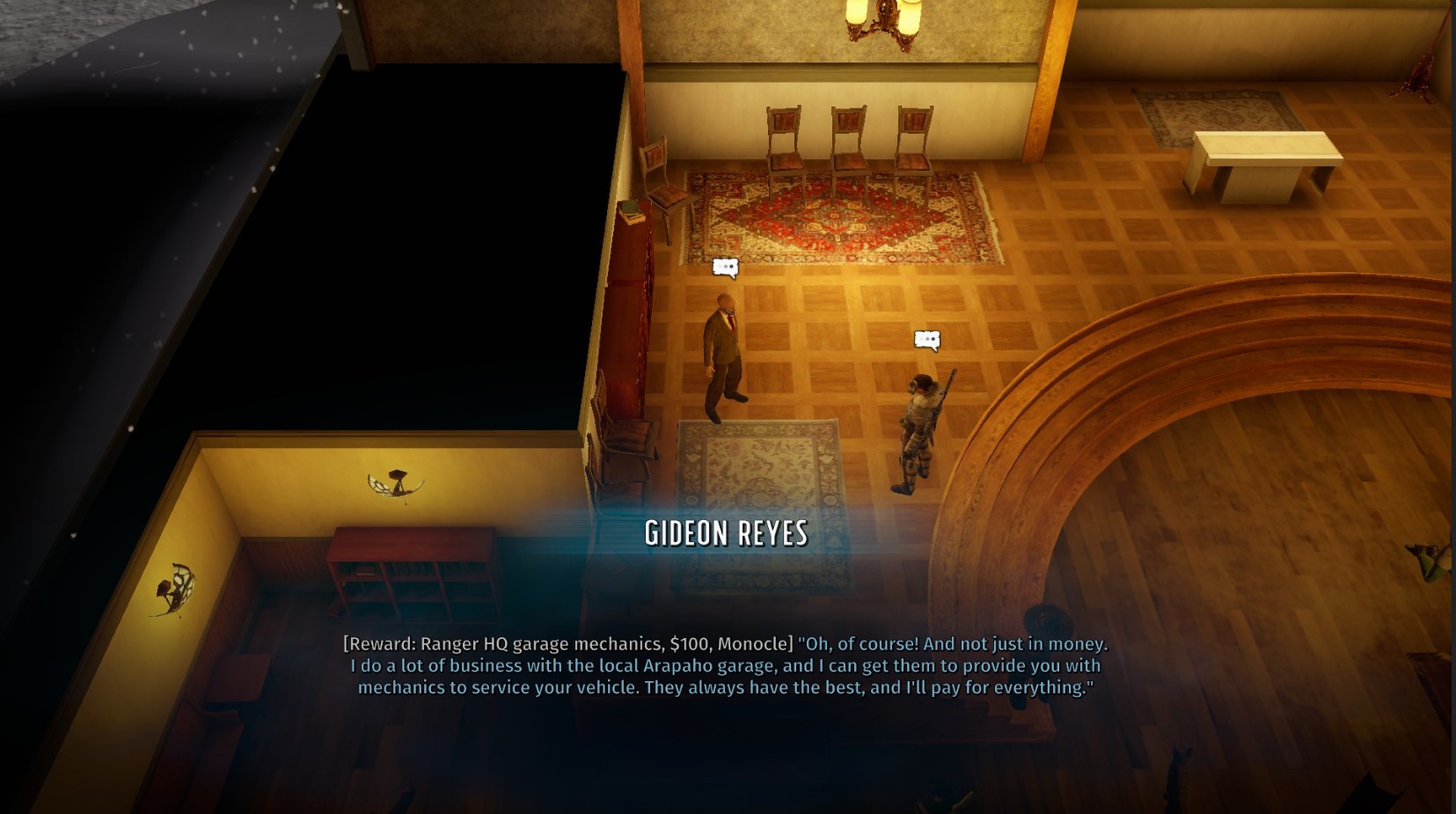 For your trouble he’ll set you up with some local mechanics to supply your HQ, while also throwing a bit of cash and a piece of unique headgear your way.

Gideon has heard the smugglers are operating out of a trading post out in the wilderness: The Bizarre.

Wasteland 3 How to get into The Bizarre

In the first place, to get to The Bizarre you need to head east from Colorado Springs into the Wasteland. Transition back to downtown from Broadmoor Plaza, then go a little north to Market Square. Now go west of Market Square to the Garage and interact with the scene transition at the edge of the screen on your left.

This lets you out into Colorado. You can now view the World Map and set a course for The Bizarre, which is south of Colorado Springs on the map.

Drive the Kodiak there. You’ll probably get the Heads or Tails mission at Hoon Homestead on the way there, but you don’t have to deal with it right away, despite what the log tells you. 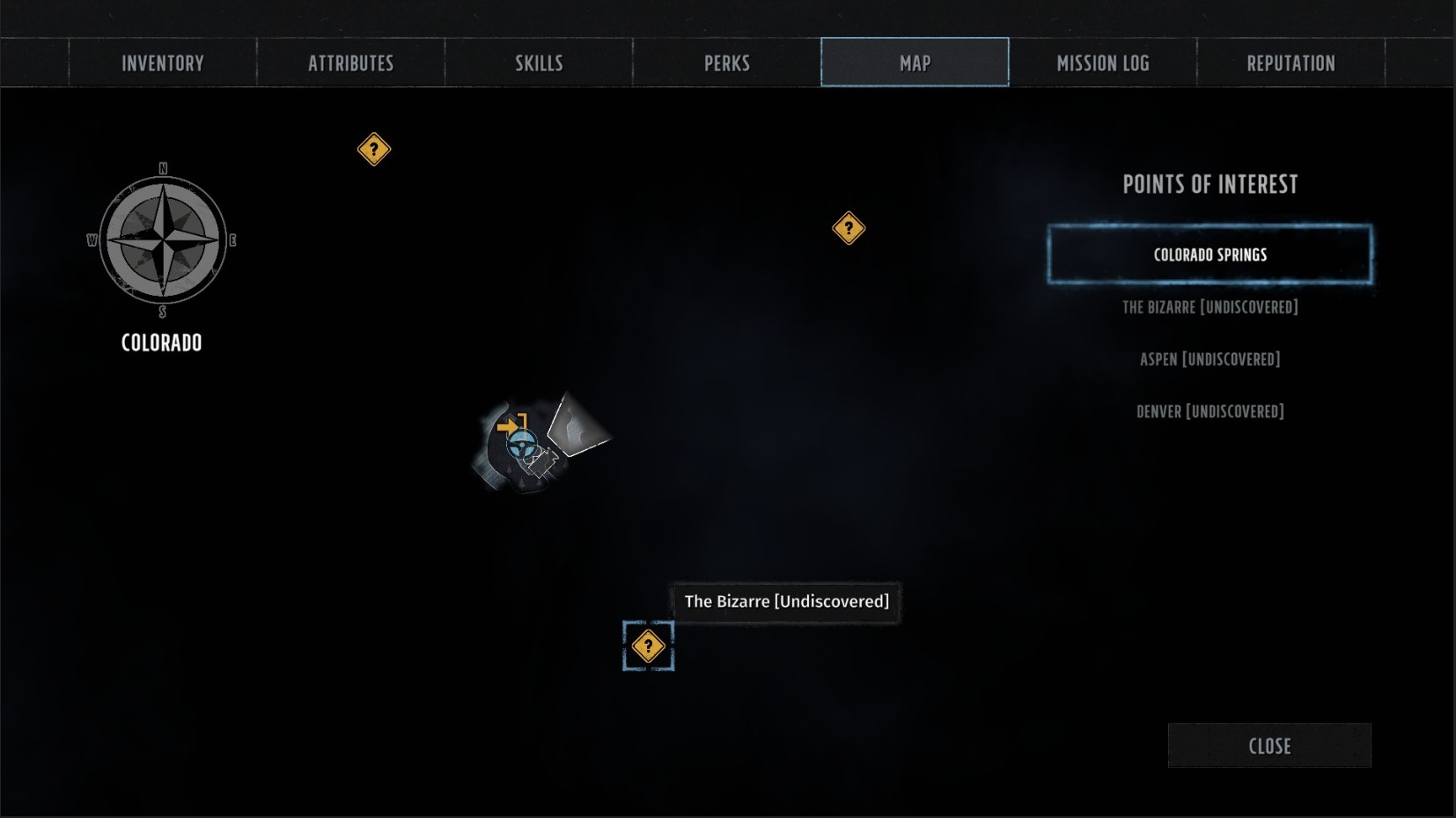 Make your way towards The Bizarre marker, and you’ll cross a bridge, then the Clown Museum on your right, before being hailed by a radio broadcast welcoming you to The Bizarre.

You’re in the territory of the Monster Army gang, so speak to the greeter, Ananda Rabindranath. He tells you to get into The Bizarre, you need to complete Knock, Knock quest. This involves either buying an entrance pass or acquiring it through other means.

Ask him about the refugee smugglers and he says to head out to the old parking garage. If you complement his suit, you can recruit him as a tailor for your HQ if you complete a quest for Flab – then Kiss Ass 6 gives you a fancy suit of your own.

You will need an entrance pass to The Bizarre to bring Unwelcome Guests to a palatable conclusion, so make it your priority to get in.

Going up to the entrance gives you the choice of simply paying $500 to get in – which isn’t that much for the aggro it saves to be perfectly honest.

Over to the south (right hand side) of the area, you can speak to Paris Handler in the Hopeful’s Camp. She can get you inside if you make blood red dye.

However, the most straightforward way of getting an entrance pass for free requires a little combat.

Head north, up towards the parking garage and make sure you kill the Bomb robots in one round, or they explode on you. 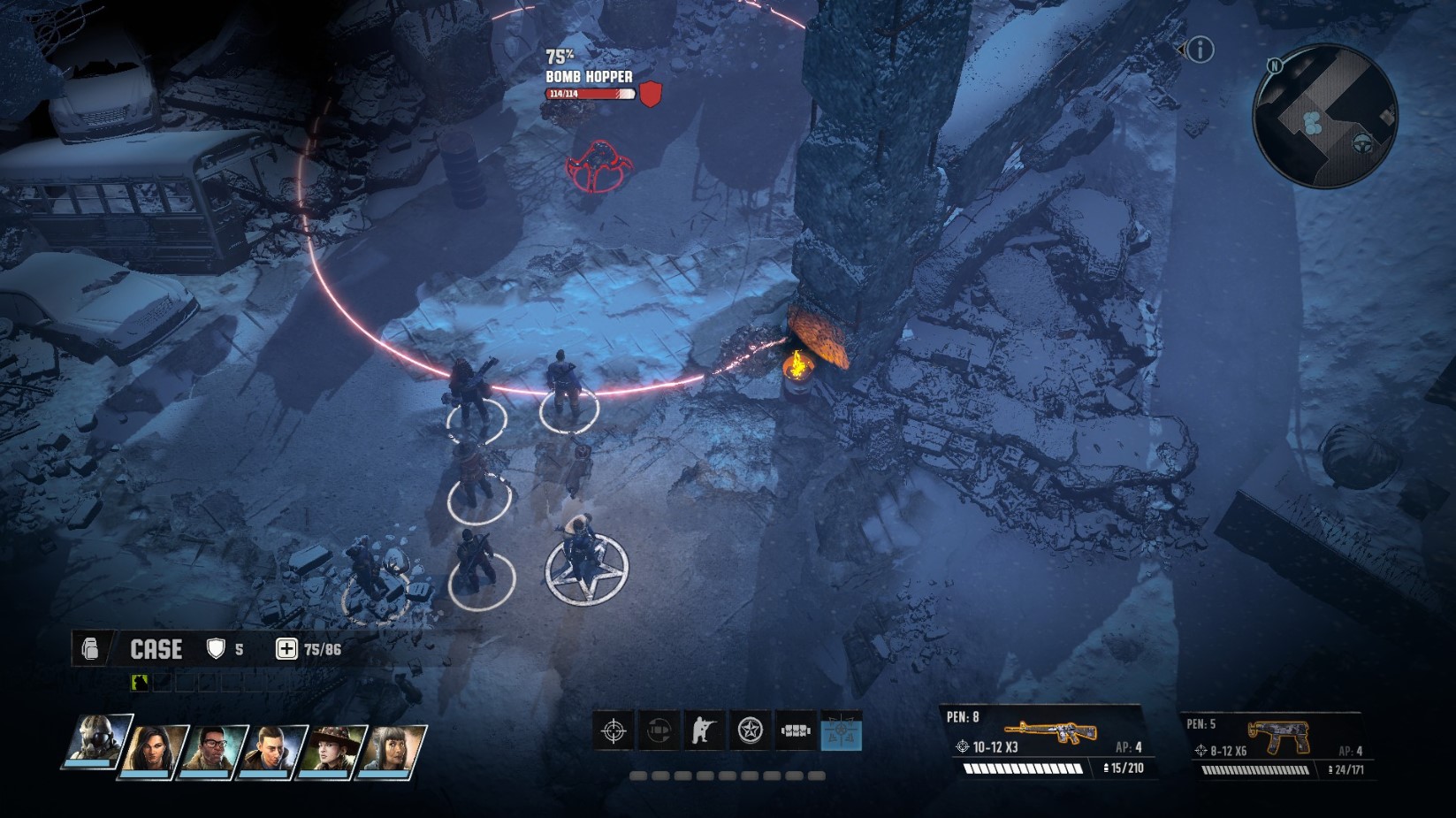 At the fork go straight on instead of left across the bridge. Refer to the screenshot map below if you’re lost: 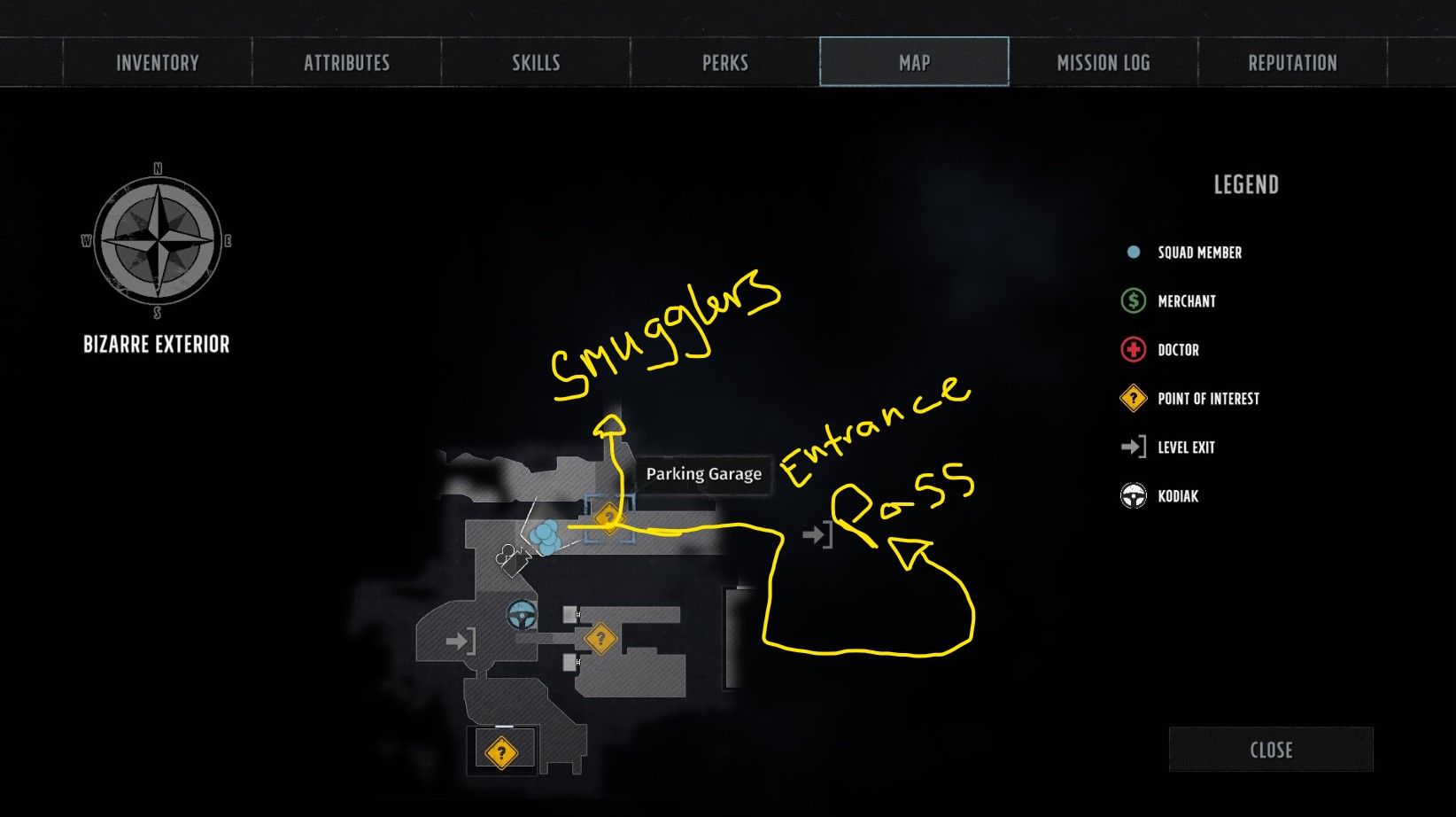 This second group is much harder. You need to position people either side of the door in cover to pop off shots, then someone over by the colourful floor to mop up the guys who run into the side room there. 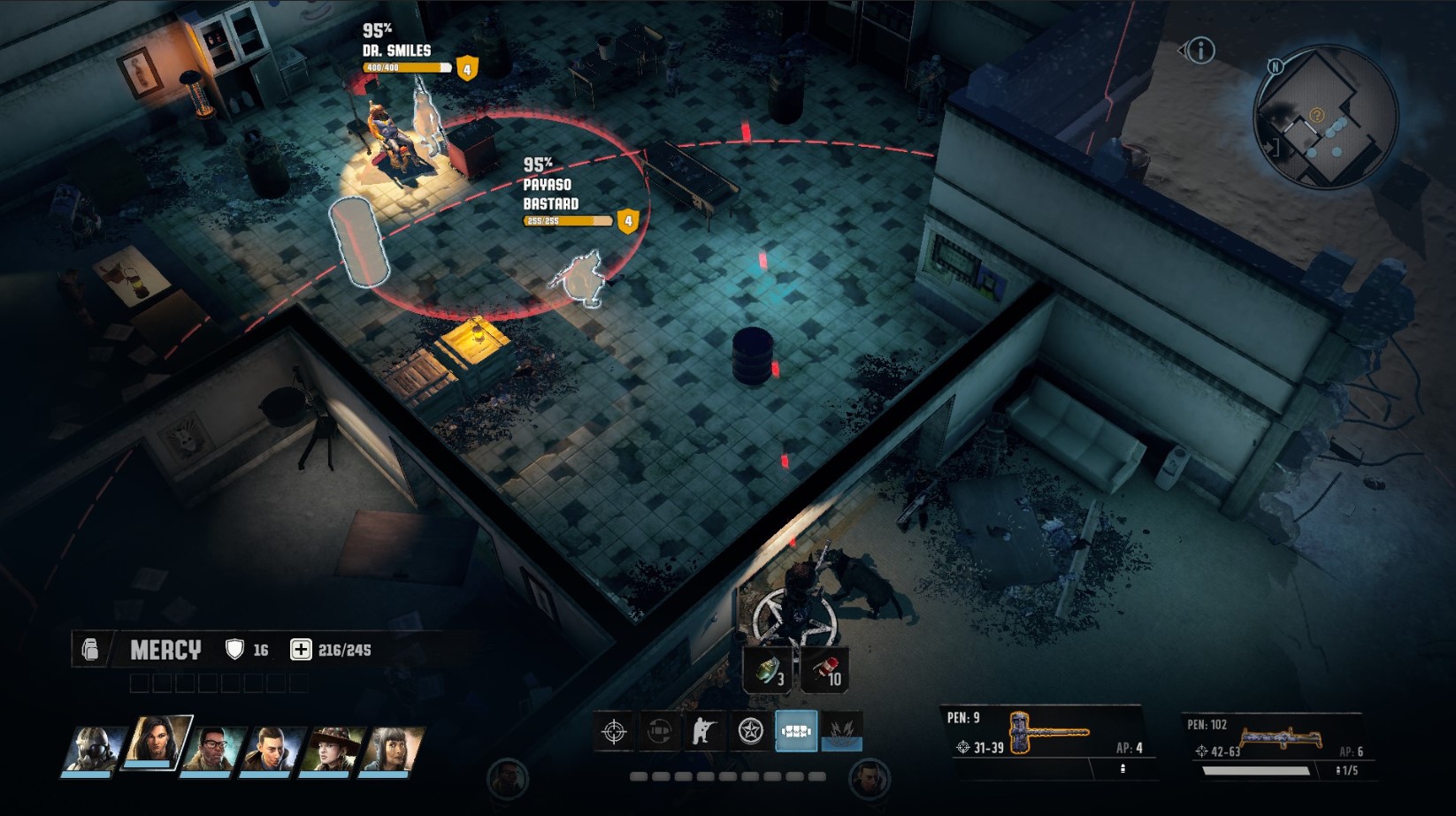 Next, get the drop on the goons by shooting the nitrogen canister in the top right corner – don’t bother walking into the room and trying to talk to them because you just get ganked.

Dr Smiles will rush you – stun him with melee if you have a character with that skill. He’ll do all sorts of crazy stuff, like deploy healing drones, if you don’t focus on him.

After the tough fight, you can collect your Bizarre entrance pass.

Make your way into the spooky mall, and heal up at the doctor in the top right corner. Now go back outside.

Go north towards the parking garage on the map, then look to the bridge in front of you. Take a few steps and you’ll start a conversation, which you can progress with Hard Ass 4. The only way into the area is across this bridge, so you’re pretty stuck with a head-on assault.

Gear up and go. It’s another tough fight, and you need to focus on finishing off the smugglers you wound otherwise they’ll just heal themselves. There’s plenty of cover in the centre and on the flanks – but try not to bunch up because they have cryo grenades. 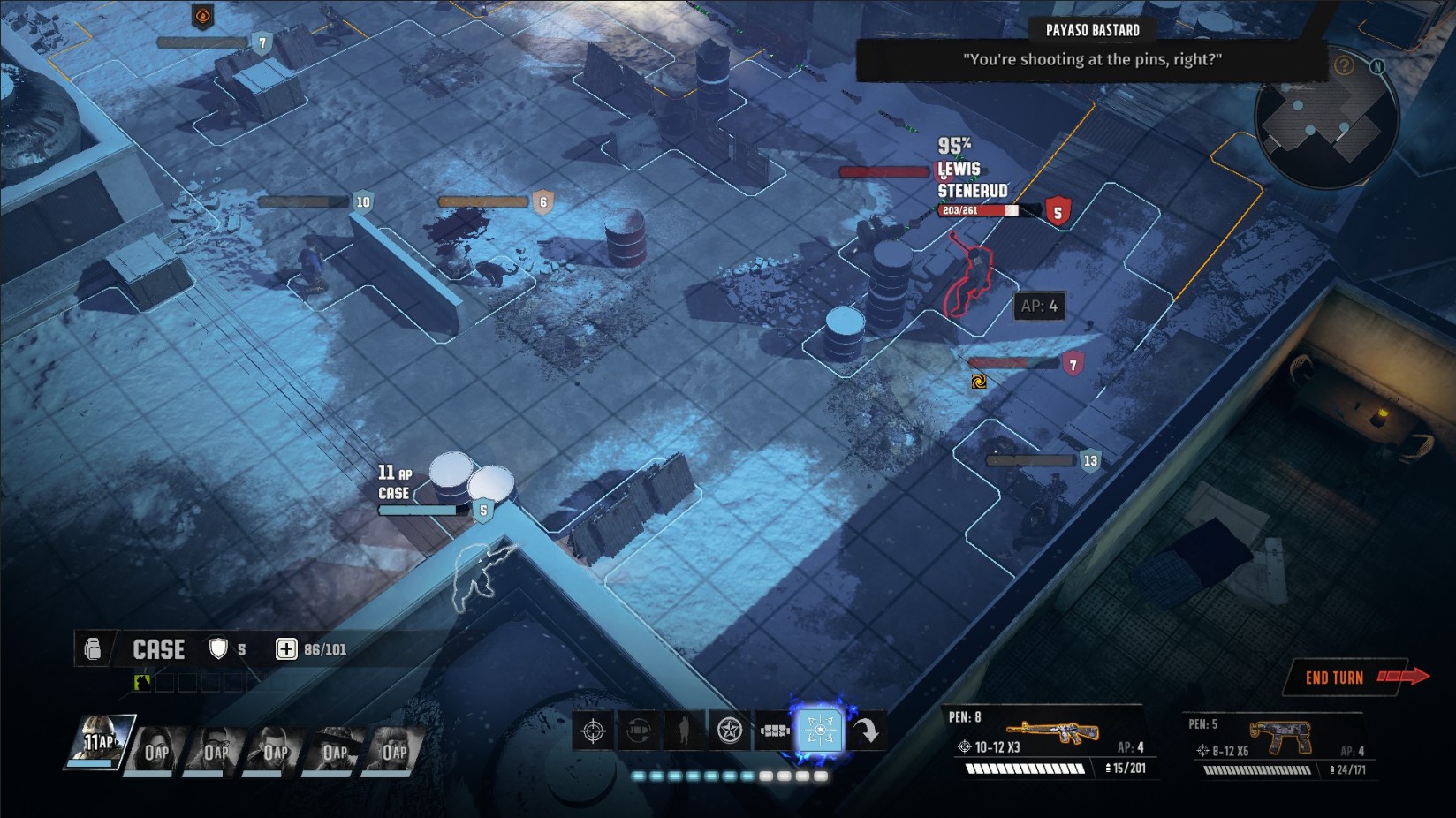 Once it’s done, search the corpses for keys and open the door in the bottom right hand corner to free the desperate refugees. Speak to Carmen, and she’ll unwittingly out Mama Cotter as the person running refugees into Colorado Springs.

You can either leave them to their own devices – read, death – or ask around in The Bizarre for a ride for them.

Inside the Bizarre, talk to Pareidolia Jones at the central bar. You need $300, Barter 6, or Kiss Ass 7 for him to agree to take them. This course of action gets you a further +5 reputation with the wasteland refugees.

With the deal struck, you need to head back to Colorado Springs and have a little talk with Mama Cotter. She’s next to the garage west of Market Square.

Back in town, talk to Mama Cotter and tell her the jig is up, the refugees are alive and well no thanks to her.

Turns out she’s motivated more out of care than avarice, and you gain an extra +5 refugee reputation for helping them get to Colorado Springs.

But Mama Cotter has still broken the law, and you can now either arrest her, let her go but ban the smuggling, or promise to look the other way.

Try to arrest her and you lose 15 refugee rep, but she’ll be safe if you send her to the Ranger Lock-up as Kwon suggests.

If you try to ban her from helping and she’ll just refuse.

So you either have to take her in or look the other way. Letting her go gets you the Cotter Boys as your garage staff, but loses you 30 Hundred Families Reputation overall, leaving you “Hated”.

Since I was already liked by the Refugees and had gained roughly 15 Rep with them already through the quest, I chose to take Mama Cotter in and stay liked by both the Hundred Families and Refugees. Cynically it’s more of a win-win.

This way, as well as mechanics from the shop, you’ll get Reyes as a political adviser back at base – if you him that is – with 15 Hundred Families Reputation on top of your reward.

Depending on how you’ve spent your time, the garage team may be the final staff member you need for the Full House quest.

Otherwise, it’s time to take on the mob in the Big Trouble in Little Vegas quest.

For more on Wasteland 3, take a look at our guide to character builds, attributes, and skills.