If taking loads of screenshots while playing games is your jam, you’ll be pleased to know that the Xbox Series X or S allows you to capture screenshots and record gameplay with the touch of a shiny new button.

For the first time, Xbox controllers have a dedicated Share button that will allow you to record and upload videos and screens with ease. It sits in the middle of the controller, just below where you can find the menu button, so it’s pretty obvious to spot.

If you’ve been both an Xbox and Playstation owner up to this point, you will be familiar with the press/ hold function of the Share button on the PS4 controller to capture images and video. This new Share button works in a similar way, but for the uninitiated, this is how you go about taking a screenshot and recording video on the Xbox Series X/S controller.

Xbox Series X/S – How to record and share captures

You can head into your capture settings and fiddle around to suit your needs if you wish, but first, let’s cover the basics. To take a screenshot with the Share button, simply press it once. If you want to record a segment of video – the default is 30 seconds – hold the Share button in.

If you want to take a look at your new screen, hold down the Nexus button – or Xbox button, as it’s more commonly known – and you’ll get a series of options. You can view your screen, send it to a friend, upload it to your Activity Feed or Twitter, set it as your Xbox home screen background and more.

To record the last 30 seconds of gameplay, hold the Share button down for a moment. If you know a particular section of interest is coming up in-game and want to record a slightly longer video, you can hold in the Xbox button and tab over to the Capture and Share screen and select “Start Recording”. You can also choose “Record what happened”, which lets you capture the last 15 seconds to two minutes of gameplay, as well as share your capture or view your most recent ones.

You can also share things from the Xbox App on your phone if you wish, as well as download them to share with your pals, on other social media platforms or whatever. You’ll still be able to trim your clips on the console to create the perfect short video. 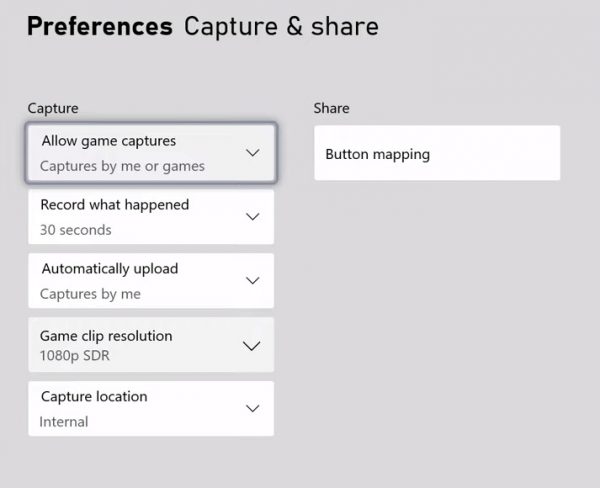 You can record clips in 1080p, 720p or 4K, whatever suits your needs. At 1080p, you can record from 15 seconds to one minute’s worth of footage, even though the two-minute option is there when you’re capturing right off the bat. At 720p, you can record up to three minutes, though there will be a noticeable drop in quality. While the sharing options are reasonably accessible, you can also change the button mapping for a tailored experience.

And that’s it! The addition of such a small yet efficient button should make taking screenshots much less of a chore, but there’s always the old Xbox One way if you fear change. You can check out Alex’s Xbox Series X/S review here if you’re still on the fence about getting either console.

Amazon customers are potentially facing some delivery delays, so check back soon for more updates and know we’ve put a big F in the chat for you if you’re missing your pre-order still.